Keeping It Together with Electromagnetism 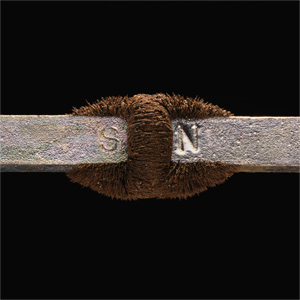 ­If you brush your hair several times, your hair may stand on end and be attracted to the brush. Why? The movement of the brush imparts electrical charges to each hair and the identically charged individual hairs repel each other. Similarly, if you place identical poles of two bar magnets together, they will repel each other. But set the opposite poles of the magnets near one another, and the magnets will attract each other. These are familiar examples of electromagnetic force; opposite charges attract, while like charges repel.

Scientists have studied electromagnetism since the 18th century, with several making notable contributions.

When scientists worked out the structure of the atom in the early 20th century, they learned that subatomic particles exerted electromagnetic forces on each other. For example, positively charged protons could hold negatively charged electrons in orbit around the nucleus. Furthermore, electrons of one atom attracted protons of neighboring atoms to form a residual electromagnetic force, which prevents you from falling through your chair.

­But electromagnetism can't explain how the nucleus holds together. That's where nuclear forces come into play.