May the Nuclear Forces Be with You 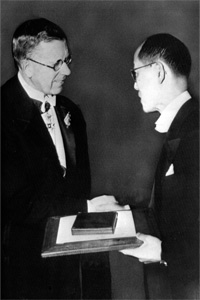 ­Dr. Hideki Yukawa, right, receives the Nobel Prize for physics in Stockholm from then Crown Prince Gustaf Adolf of Sweden Dec. 10, 1949, for his postulation on the meson.
AP Photo/­Getty Images

­The nucleus of any atom is made of positively charged protons and neutral neutrons. Electromagnetism tells us that protons should repel each other and the nucleus should fly apart. We also know that gravity doesn't play a role on a subatomic scale, so some other force must exist within the nucleus that is stronger than gravity and electromagnetism. In addition, since we don't perceive this force every day as we do with gravity and electromagnetism, then it must operate over very short distances, say, on the scale of the atom.

In the 1950s, physicists built particle accelerators to explore the structure of the nucleus. When they crashed atoms together at high speeds, they found the pions predicted by Yukawa. They also found that protons and neutrons were made of smaller particles called quarks. So, the strong force held the quarks together, which in turn held the nucleus together.

One other nuclear phenomenon had to be explained: radioactive decay. In beta emission, a neutron decays into a proton, anti-neutrino and electron (beta particle). The electron and anti-neutrino are ejected from the nucleus. The force responsible for this decay and emission must be different and weaker than the strong force, thus it's unfortunate name -- the weak force or the weak nuclear force or weak nuclear interaction.

With the discovery of quarks, the weak force was shown to be responsible for changing one type of quark into another through the exchange of particles called W and Z bosons, which were discovered in 1983. Ultimately, the weak force makes nuclear fusion in the sun and stars possible because it allows the hydrogen isotope deuterium to form and fuse.

­Now that you can name the four forces -- gravity, electromagnetism, the weak force and the strong force -- we'll see how they compare and interact with one another.