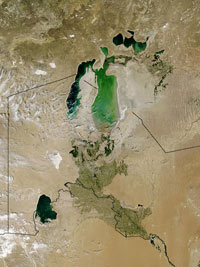 This aerial photograph shows damage to the Aral Sea caused by diversion of its water.
Photo courtesy NASA

In many areas, water is regulated and distributed by governments. In the United States, it's regulated by the Safe Drinking Water Act. However, government control isn't always in the best interests of all people. In the 1930s, to irrigate cotton fields, the Soviet government created canals to divert the rivers that fed the Aral Sea (located between Kazakhstan and Uzbekistan). As a result, the surface area of the sea has shrunk by more than 50 percent and its volume by 80 percent over the past 50 years [source: Swanson]. Its salinity increased and it became polluted with pesticides, fertilizer runoff and industrial waste. The loss of the sea meant the decline of the commercial fishing industry, which helped to send the region into poverty. The pollutants from the exposed seabed have been found in the blood of Antarctic penguins [source: Swanson].

Some regions have privatized their water distribution, which has often led to conflict. In the late 1980s, the United Kingdom sold its water boards (governmental water-supply organizations) to private companies, which improved the infrastructure. Many people were outraged that companies could profit off such a basic need, especially when people who could not pay their bills suffered harsh penalties. The problem was later remedied with legislation.

In 2000 and 2005, demonstrators took to the streets in Bolivia to protest the privatization of the water supply. When foreign companies took over Bolivia's water system, the cost of water became too expensive for the poor. In the city of El Alto, "the cost of getting a water and sewage hook-up exceeded a half-year's income at the minimum wage" [source: Shultz]. The 2000 revolt, called the "Bolivian Water Wars," led to martial law and 100 injuries. After both incidents, the Bolivian government canceled the private company contracts.

Currently, more than a billion people, about 17 percent of the world's population, don't have access to clean water [source: World Health Organization]. There are several governmental and nongovernmental organizations, including UNICEF and Water Aid, working to help poor communities in Asia and Africa obtain sustainable supplies of drinking water and sanitation facilities. Water shortages happen in the United States, too -- many states have programs to assist the disadvantaged with obtaining enough water and paying their water and sewer bills.

Obviously, lack of water is a big problem. But why is that, exactly? In the next section, we'll look at the part that water plays in the human body.

One way you can help reduce the demand for water is to conserve water year-round. Many areas ban watering your lawn and garden when water runs low, but here are a few easy things that you can do on your own:

For more tips, check out this link from the EPA.