A World of Simulation 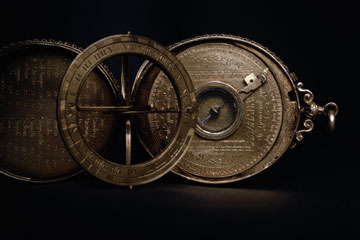 A simulation of the stars, by virtue of Sir Francis Drake's 16th-century astrolabe
RDImages/Epics/Getty Images

Simulations allow us to test and experience one system or process through the functioning of another. A U.S. Air Force flight simulator allows aspiring fighter pilots to test-drive an F-22 Raptor without endangering themselves -- or a $200 million aircraft. Likewise, a Resusci Anne CPR training dummy stands in for an unresponsive victim without risking a human life.

People have turned to models and simulations since time out of mind. Models of both people and animals often turn up at prehistoric sites, and the ancient Egyptians, Greeks and Romans all built models of their vehicles and buildings. In addition to ceremonial uses, these miniatures served as tools for teaching and planning -- much like the models we use today.

Humans also developed the means to copy more than mere physical forms. They learned to simulate systems. The ancient astrolabe, for instance, served as an indispensable astronomical tool for more than 2,000 years and is a working model of the night sky and the position of the stars. The user plotted colossal, interstellar movements while holding the device in the palm of his or her hand and manipulated the data to gauge time, location and distances.

The astrolabe was essentially an analogue computer, a pre-digital device that incroporated electrical, hydraulic or mechanical systems to simulate another system. The Monetary National Income Analogue Computer (MONIAC) stands as another classic example of analogue computing. Built in 1949 by engineer and economist Bill Phillips, the MONIAC used the flow of colored water through pipes, drains and pumps to simulate the British economy.

The science of weather prediction is far from perfect, but better equations, more powerful computers and a widening array of atmospheric data sets continue to improve the accuracy of our simulations.

But can we really simulate the world itself? To find out, we have to travel the waters of big data.