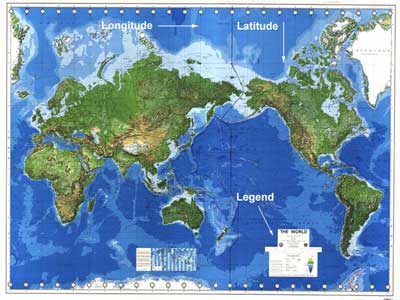 A conventional map of the world
Image courtesy USGS

Even though they can incorporate diverse sets of data, maps usually follow several basic conventions that help people make sense of them right away. Turner explains, "[One convention] used in cartography on political maps, on most maps, [is] that the water is blue. It can throw people when you try to use a different color to signify something like water." In addition, on physical maps, land masses are usually brown or tan, and vegetation is green.

Maps depict their subject matter from above and use lines and color to differentiate between regions. Political maps tend to use similar symbols and type sizes to indicate borders, cities and other objects. On many, but not all, maps, north is at the top - other maps often include an arrow to indicate directions. Most maps have a legend explaining their symbols, and many have a scale noting relationship between the size of the map and the size of the real world, such as one inch to 100 miles. Some maps express scale as a ratio, such as 1:25,000.

Most maps also include some kind of coordinate system to help people find specific locations. On a street map of a city, this might be a simple grid marked with letters and numbers. Larger maps usually use imaginary lines known as longitude and latitude. On a globe, these lines are orderly and evenly spaced. All lines of longitude, or meridians, run in a north-south direction are the same length. The lines of latitude, or parallels, all run east and west and are shorter the farther they are from the equator.

Maps, on the other hand, can wreak havoc on the parallels and meridians. This is because the Earth is shaped roughly like a pumpkin, and getting a flat piece of paper to accurately resemble the entire surface of a pumpkin isn't easy. You can get an idea of the difficulties involved by drawing a picture on an inflated balloon. Then, stretch the deflated balloon until it lies flat. You can still imagine what the original picture looked like, but the sizes and shapes are all wrong.

You can make the deflated picture a little more accurate by cutting it into pieces so that the balloon resembles the gores used to make spherical globes from flat paper. Unfortunately, the resulting series of pointed segments still doesn't look much like the original picture. Adjacent parts don't touch each other, and you have to imagine what they would look like without the gaps.

To get around the shortcomings of flat paper, cartographers use a variety of map projections. We'll explore them in the next section.