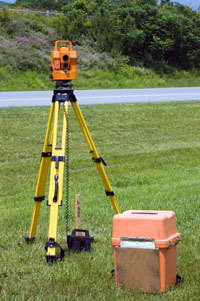 Instruments like these allow surveyors, geologists and cartographers to take accurate measurements in the field.
Image courtesy Dreamstime

At their core, maps are visual expressions of measurements. The measurements for the first maps most likely came from mapmakers' exploration of the local terrain. Eventually, more people traveled and documented the locations of distant land masses and bodies of water. Mapmakers compiled these in-person measurements, sketches and notes into representations of more of the world. Cartographers also built on the knowledge of their predecessors, a trend that continues with today's derivative maps, which use other maps as sources.

Some of today's maps also rely on physical measurements taken by real people. Surveyors use instruments to take precise measurements of land and water, as well as the positions of manmade features. This information is vital to accurate topographic maps. Similarly, geological maps also rely on geologists' field studies. Improved instruments, including GPS receivers and electronic data collectors, have made such field research increasingly accurate. Researchers can also study deeds and sales records and interview local residents to determine the correct place names for maps of previously unmapped areas.

A map of China. Check out more interactive maps on our ­Maps channel. You can also see maps of India and Japan.­

Today's technology also makes it possible for cartographers to make detailed maps of places they have never been. The field of remote sensing, or aerial and satellite photography, has given cartographers a vast amount of new information about the Earth. Remote sensing isn't particularly new -- the first use of aerial photography for mapmaking took place in 1858. However, its use in mapmaking wasn't widespread until after World War II, when cartographers started using reconnaissance photographs as map data.

Most of the time, converting satellite and aerial images to maps requires the skill of a human cartographer. Cartographers can measure the features of an image at regular intervals, or they can trace entire outlines. These two methods are known as raster and vector encoding, and both can be time consuming. Computer programs can help with the process, and some can even recognize differences in old and new photographs. This may eventually automate the process of updating map data. We'll take a look at thematic maps in the next section.