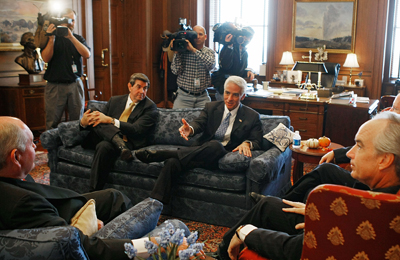 The governors of Georgia, Alabama and Florida met in Washington, D.C. in November 2007 to discuss a water-sharing agreement.
Courtesy Mark Wilson/Getty Images

In the United States, one of the wealthiest nations in the world, one small town has already learned what it means to run out of water. The water supply for Orme, Tenn., went dry in 2007. It was a hardship for the town's 145 residents, but it was something they overcame with the help of their neighbors. The nearby town of New Hope, Ala., allowed Orme to bring in trucks to take water from their supply to fill the town's water tank. What's more, New Hope allowed the town of Orme to install a two-mile-long pipe which taps into its water supply.

Around 150 miles to the south, Atlanta's water war is being addressed not through sanctions or conflict, but through diplomacy. In November 2007, the governors of Georgia, Florida and Alabama -- three states whose regions depend on a common water supply -- met in Washington, D.C. to discuss a water-use agreement between the three states. In the western U.S., a similar process was undertaken between seven states that share a common water supply. Water-use agreements are also becoming common elsewhere in the world: During the 20th century, 145 water treaties were created in places like the Middle East and Asia, where water is scarce [source: Leslie].

Technology may also play a key role in ensuring an adequate water supply. Agricultural uses make up 70 percent of all of the water consumption by humans. But 42 percent of all of the water people use agriculturally is lost due to inefficient irrigation techniques. Drip-irrigation systems are becoming increasingly popular, as they operate with as much as 95 percent efficiency [source: Energy Services]. Traditionally, drip systems are more expensive than other irrigation methods, but some companies are finding ways to reduce the cost of these systems, making them more affordable for poor countries that lack water resources.

Desalinization plants -- which remove salt from seawater to produce freshwater -- are already in operation throughout the world. They're expensive to operate, but the costs associated with this technology are expected to decrease in the future.

Another water-conservation solution may be to cultivate crops that require less water to grow and produce. Bioengineers are attempting to create genetically modified plants that could grow well without artificial irrigation. While the thought of eating genetically modified foods makes some people squeamish, the food of the future may be created in a laboratory.

Not all water supply solutions rely on technology. Some suggest that simply increasing the perceived value of water may be an answer to the water crisis. Making water a strictly public utility (meaning it is not available for sale by for-profit companies), and raising the price of water could reduce waste. If water costs more, it would become more valuable to consumers. Logically, this would encourage the public to conserve more. In other words, if water is more expensive, a person would be less likely to keep the water running while he brushes his teeth.

There are essentially two views of the current water crisis: optimism and pessimism. As water supplies diminish, conflicts may emerge. Illness and death may take place. But while some may fight, the struggle to maintain or create a viable water supply has encouraged cooperation and innovation between governments. From water crisis also springs hope.

For more information on water and related topics, read the next page.