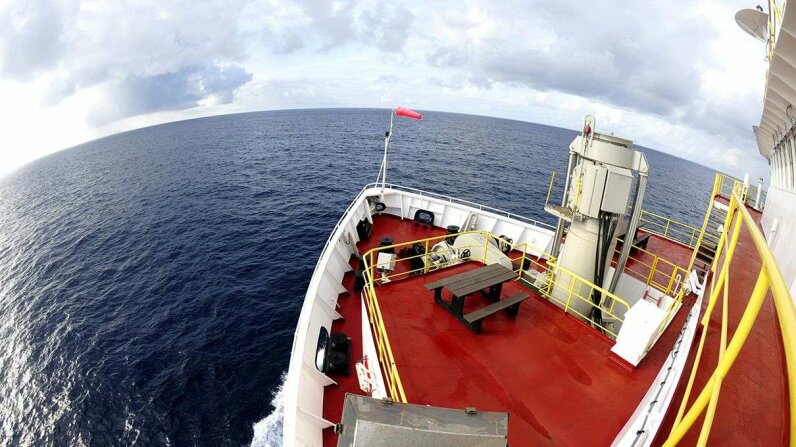 A team of 30 scientists launched aboard the JOIDES Resolution on December 6, 2015, in an expedition to penetrate the Earth's crust. Zhang Jiansong/Xinhua Press/Corbis

Think back to your early lessons in Earth Science and you'll remember the basics — the Earth's surface is on top of the crust. Beneath that is the mantle, and at the center of our planet is the core. We know general facts about the core (it has an outer layer made of molten iron) and the mantle (it is mostly solid rock and makes up 84 percent of our planet's volume). But we've never observed them directly.

Scientists are trying to change that. The latest attempt started in December 2015 and will continue in 2016. A drill ship called the JOIDES Resolution will begin digging at the Atlantis Bank, which is located in the Indian Ocean. It's a special spot where the Earth's mantle may extend above a barrier that usually lies between the crust and the mantle called the Mohorovičić discontinuity, or Moho for short. To understand how the ship works, watch this video from an earlier 2015 expedition.

The upcoming expedition is led by chief scientists Henry Dick of the Oceanographic Institute and Chris MacLeod of Cardiff University. Peter Blum of Texas A&M University serves as the project's Expedition Project Manager and staff scientist.

Normally, a crew would have to dig several kilometers through the crust and then penetrate the Moho before reaching the mantle. But at Atlantis Bank, the researchers hope to bypass that. It still won't be easy — the JOIDES ship will only get things started for two future drilling operations, the last of which will require a different drilling vessel, the Japanese Chikyu, to complete. Those future operations will require more funding, which the team has not yet secured.

Should they succeed, the researchers will be able to take geological samples deeper than we've ever seen before, expanding our knowledge of Earth science. One of the scientific objectives of the project is to discover the process of mid-ocean ridge basalt formation (basalt is a type of igneous rock). They'll also be looking for signs of microbial life at different depths. It's an ambitious and potentially revolutionary project.

It's not the first time scientists have tried to get a glimpse into the inner workings of our planet. But so far, no one has succeeded in penetrating the mantle.

While we wait to see if this latest expedition meets with success, let's explore some of the most interesting holes in Earth's surface in this video.

Now That's Interesting
This won't be Henry Dick's first attempt at drilling past the Earth's crust; he was involved in a failed 1997 effort to reach the mantle.