Browse the article Is the Dead Sea really dead? 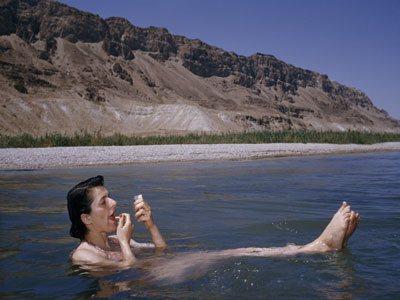 Image Gallery: Beautiful Beaches A woman floating in the Dead Sea applies her lipstick. Staying afloat is effortless; why not use your free hands to perfect your appearance? See more pictures of beaches.
David Boyer/National Geographic/Getty Images

In name only, the Dead Sea may not sound like the most charming place in the world to visit. Despite its gloomy moniker, however, the salty body of water is known for its ability to bolster the mind, body and soul. Only one of the many fascinating aspects of the Dead Sea is the fact that, since its surface is 1,300 feet (396 m) below sea level, its shore is the lowest dry point on Earth [source: Ancient Sandals]. Located in a valley that is surrounded by the West Bank, Jordan and Israel, the Dead Sea covers roughly 250 square miles (402 square km) [source: Washington Post]. Given its location, it's no real surprise that the Dead Sea (or the "Salt Sea," as it was referred to in the Old Testament) has an extensive religious history. Also, its onetime main tributary, the Jordan River, is believed by many to be the place where Jesus was baptized [source: Washington Post].

So what exactly gives the Dead Sea its name? The Dead Sea is different from all other bodies of water on Earth because it's incredibly salty, with a saline level between 28 and 35 percent. By comparison, the world's saltiest oceans are only 3 to 6 percent [source: Ancient Sandals]. The Dead Sea owes its high mineral salt content to several factors. First, it's completely landlocked, so any fresh or saltwater that flows into it from the Jordan River and other tributaries (estimated at six and a half million tons per day) is trapped -- until it evaporates [source: Catholic Encyclopedia]. Evaporation happens quickly because that portion of the world is, to put it mildly, extremely hot. When the water evaporates, the salty minerals are left behind, causing the remaining water to become more and more concentrated with salt [source: Extreme Science].

Of course, plain old table salt isn't what gives the Dead Sea its oomph. Rather, at least 35 different kinds of mineral salts (like those found in oceans) are present in massive quantities. Some of the minerals present include potassium, bromine, calcium, magnesium and iodine [source: Atlas Tours]. These are the salts that give the Dead Sea its name. Any living creature or plant (even seaweed) that dares enter these saline-charged waters dies pretty much instantly. Only simple organisms like microbes can survive the harsh conditions [source: Extreme Science]. The Dead Sea is simply too salty for anything else to exist.

On the next page, we'll discuss how the Dead Sea itself is "dying." 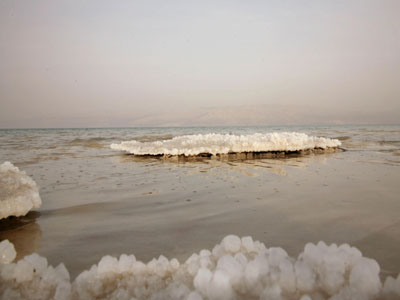 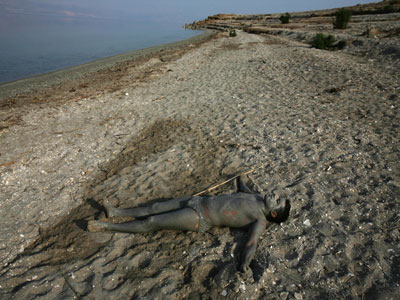