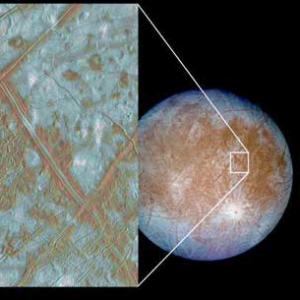 Europa's ice rafts are blocks of ice that show that Europa may have had a subsurface ocean in its past.
Image courtesy NASA Jet Propulsion Laboratory

So, why is Europa, an inner moon of Jupiter, such an interesting target for exploration? The Voyager and Galileo space probes showed that Europa was covered with an ice sheet. Because Europa is so close to Jupiter, the planet's gravity tugs on it, alternately stretching and compressing the moon in its orbit. These gravitational forces create heat within the moon. This heat escapes through volcanic activity and could warm the underside of the ice sheet, creating a liquid ocean.

Evidence for a liquid ocean exists in the fractured pattern of the ice sheet, which is 10 kilometers (6.21 miles) thick. Similar patterns can be seen in the Arctic ice sheet as viewed by satellites from Earth orbit. Measurements of the magnetic field indicate that the prospective ocean might be salty. Also, calculations indicate that there is a sufficient amount of heat generated by tidal forces to make a liquid ocean.

If a liquid ocean exists and volcanic activity from tidal forces exist, then there may be hydrothermal vents on the "ocean" floor, like those found on Earth near mid-ocean ridges.

On Earth, we know that many diverse life forms survive around hydrothermal vents in communities that are based on chemosynthesis, the formation of organic compounds using geothermal energy. Chemosynthetic bacteria form the basis of the food chain in these communities. Other organisms within these communities include giant tubeworms, clams, crabs and fish.

Astrobiologists believe that life needs liquid water, carbon-containing (organic) compounds, and a source of energy. Europa appears to have these ingredients as well and, therefore, could have life.

So a mission to Europa would include an AUV that could explore the ocean, carry out scientific experiments and relay results back to Earth.

Aerospace plans to build a subsequent vehicle called ENDURANCE, which will go one step further. It will be smaller, but just as capable as DEPTHX. ENDURANCE's test will be to explore a lake in Antarctica that is submerged beneath the ice sheet. NASA is currently developing the technology to melt through kilometers of ice into the lake. ENDURANCE will be lowered through the melt-hole into the lake for exploration using scientific principles and technologies, developed and tested by DEPTHX.

For lots more information on DEPTHX and related topics, check out the links below.