Why is seawater salty? 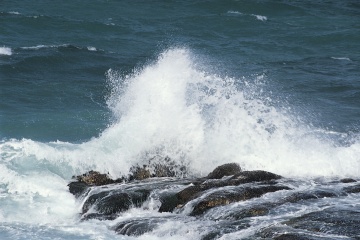 To understand why the seas are so salty, look no further than the water cycle. Simply put, the water cycle begins when fresh water falls from the sky in the form of rain. It eventually ends up in rivers, lakes and oceans, where it soon evaporates to form clouds and repeat the cycle.

If you dig a little deeper into each stage of the water cycle, you'll see just how salt gets into the mix. That fresh water that falls as rain isn't 100 percent pure. It mixes with carbon dioxide in the atmosphere on the way down, giving it a slightly acidic quality. Once it reaches the Earth's surface, it travels over land to reach area waterways. As it passes over the land, the acidic nature of the water breaks down rocks, capturing ions within these rocks and carrying them to the sea. Roughly 90 percent of these ions are sodium or chloride — which, as we know, form salt when they band together [source: NOAA].

Fresh water that reaches the ocean evaporates to form clouds. However, the sodium, chloride and other ions remain behind, where they accumulate over time to give the sea its characteristic saltiness. Hydrothermal vents on the ocean floor release additional dissolved minerals, including more sodium and chloride, further contributing to the briny nature of the sea [source: USGS].

What's surprising is just how much the salt from runoff and underwater vents has built up since oceans formed. Dissolved salts make up 3.5 percent of the weight of all ocean water [source: USGS], and if you could remove this salt from the sea, it would form a layer 500 feet (153 meters) thick over all of Earth's land mass. That's about the height of a 40-story building [source: NOAA].

One question, though: If the seas get their salinity from runoff, why do lakes remain relatively salt-free? For most lakes, water flows both in and out of the lake via rivers and streams. Salt ions that end up in the water are carried out, keeping the lake fresh. These ions eventually end up in oceans, which serve as a "dumping ground" of sorts for runoff and the minerals it contains. Bodies of water with no outflow, such as the Dead Sea or the Great Salt Lake in Utah, maintain a level of salinity on par with or higher than that of the ocean [source: Jackman].

What Did Your Address Look Like 250 Million Years Ago?
How did Lake Nyos suddenly kill 1,700 people?
What's so special about a dinosaur named Leonardo?