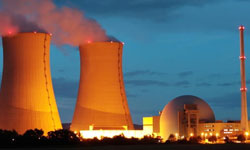 In December of 1942, an experiment that would change the world was taking place at the University of Chicago. After years of research and a month of construction, the world's first nuclear reactor, Chicago Pile-1, was ready for testing.

Constructed of a lattice of graphite blocks full of uranium oxide and uranium metal that were stacked 57 layers high, Chicago Pile-1 bore little resemblance to today's nuclear reactors [source: Alfred]. A three-person "suicide squad" was waiting to step in and shut the reactor down in case the reactor's safety features failed. Fortunately, the more than 50 people in attendance that day were able to share a collective sigh of relief -- as the squad was not needed [source: Alfred]. The reactor worked without a hitch, and the nuclear era was born.

In 2011, more than 440 nuclear power plants in 30 countries across the globe were busy supplying 14 percent of the world's current electricity needs [source: World Nuclear Association]. Nuclear power certainly has its pros and cons, but no one can deny its importance.

Now that we know a little about how far nuclear power has come over the past 70 years, let's visit the top 10 nuclear power plants on Earth. We've rated them by the collective net capacity of the facility, but as you'll see, power capacity doesn't always equate to the greatest energy output.