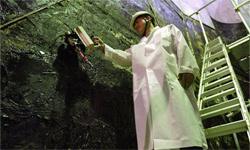 Yonggwang may be the silver medalist in terms of total net capacity, but for energy output it gets gold. The 48,386.218 gigawatt-hours of energy delivered by the power station in 2010 could meet the annual electricity consumption of Hong Kong and Alaska combined [source: World Bank, KU Institute for Policy & Social Research].

Units 3 and 4, which were completed in 1993 and 1994, respectively, are among the top 10 performers in terms of nuclear performance: Unit 4 achieved "One Cycle Trouble Free" operation following its 387 days of continuous operation [source: Power Technology]. The unit operated at a capacity factor of 102 percent during its third fuel cycle with no shutdowns. Yonggwang Units 5 and 6, which cost an estimated $4 billion, are Korean Standard Nuclear Plant (KSNP) designed and came online in 2002. Since then, the reactors have operated at cumulative operating factor of about 88 percent and have generated a total of 130,351 gigawatt-hours of energy [source: IAEA PRIS].

Building Yonggwang Units 5 and 6 wasn't all smooth sailing. Their construction precipitated demonstrations by local residents, who took to the streets in the 1990s in protest. The project underwent delays when Yonggwang County canceled construction permits in 1995, but eventually the project moved forward. It was the first utility project undertaken by the Korea Electric Power Corp. (KEPCO) to receive local opposition [source: Power Technology].