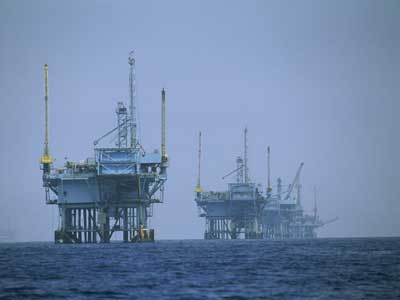 The United States consumes more oil than any other nation on Earth -- more than 20 million barrels per day [source: CIA]. Fluctuations in the global petroleum market have led to nationwide panic and taken center stage in political races. Many people charge that concern over oil supply resulted in the U.S. military's presence in Iraq. As a result, it may seem ironic that some of the most coveted petroleum reserves on the planet are on U.S. coastlines.

­The U.S. Department of the Interior estimates there may be 18 billion barrels of recoverable, undiscovered oil and 76 trillion cubic feet of natural gas underneath the country's outer continental shelf (OCS). The U.S. federal government defines this shelf as the area that begins 3 to 9 nautical miles from shore and terminates 200 nautical miles out, or farther, depending on how far the continental shelf extends. The 3 to 9 miles closest to the shore, however, remain the property of the individual states.

Why can't oil companies lower their drills into these potentially fertile seabeds? Well, for starters, some coastal waters are national marine sanctuaries set aside for marine sea life. Much of the remaining OCS territory currently falls under the protection of a federal law against offshore drilling. A number of coastal states, such as Florida, also ban drilling in state waters due to environmental and tourism concerns.

But there's definitely offshore drilling in U.S. waters. Petroleum companies currently lease 68 million acres of offshore real estate. Some of the most successful drill sites are situated in the eastern Gulf of Mexico and the coastal areas of Alaska -- both rich areas of oil exploration. A number of these leases exist in prohibited areas, but predate the federal ban.

If Congress agrees, petroleum companies might get their hands on the goods, but don't expect a sudden drop in prices. The U.S. Department of Energy estimates that new drilling wouldn't have an impact on the economy until 2030. After all, you can't just find a promising drill site and throw an oil rig on top of it overnight. Even after decades of production, experts warn that the economic impact might be minimal.

­Not all th­e world's coveted petroleum reserves have been kept tantalizingly behind protective laws for decades. In the case of Brazil, a prime oil field just popped up on the radar.