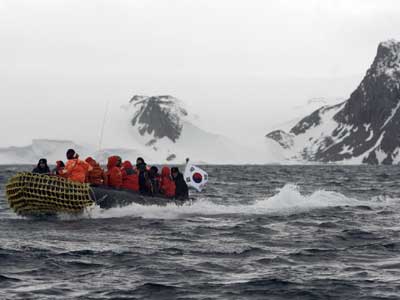 A boat transports U. N. delegates from South Korea to Antarctica in November 2007. The visit came in response to challenges to the 1959 treaty aimed at staving off territorial claims on the continent.
Rodrigo Arangua/AFP/Getty Images

The southernmost continent of Antarctica presents one of the harshest environments on the planet. The region has no native population, and it's only been in the last century that humans have taken enough interest in the continent to set up research stations and stake claims of ownership.

Currently, seven­ nations ­have formal territorial claims in Antarctica: Argentina, Australia, Chile, France, Great Britain, New Zealand and Norway. Some of these claims overlap. Most of Great Britain's stake, for instance, is also spoken for by either Argentina or Chile. Meanwhile, the United States, Russia and a number of other countries neither recognize these territorial claims nor make any of their own. Under the terms of the Antarctic Treaty of 1959, how­ever, the entire continent is reserved purely for scientific research.

During the energy crisis of the 1970s, several oil companies argued in favor of perusing Antarctic petroleum and, in the early 1980s, scientists discovered large offshore oil reserves surrounding the continent. Specifically, geologists suspect the Weddell and Ross Sea areas may hold 50 billion barrels of oil [source: DOE: EIA]. To protect these resources from exploitation that might result in political and environmental instability, several nations signed the 1991 Madrid Protocol. The protocol, which went into effect in 1998, placed a moratorium on mining and drilling for petroleum for a minimum of 50 years. Even if mineral resources are accidentally uncovered through scientific research, no one can legally exploit them.

While the Madrid Protocol doesn't expire until 2048, some nations are already looking ahead. Great Britain is currently preparing a "claim in name only" under the U.N. Law of the Sea treaty for coastal waters off its existing Antarctic claim. British officials insist the measure is only to safeguard the country's interests in the area, in the event that the ban on mineral and petroleum exploitation changes. If accepted, this claim would cover more than 360,000 square miles (932,396 square km) of undersea territory.

­But treaties aren't the only thing keeping drills out of tempting petroleum deposits. Sometimes, we just lack the technology.