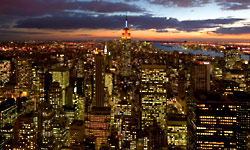 How much do you know about smart grid technology?
John Wang/Digital Vision/Getty Images

On May 11, 1935, President Franklin D. Roosevelt picked up a pen and signed Executive Order No. 7037. The result was a game-changer. At the time, only one of every 10 rural homes had electricity. The legally binding Presidential order, however, created the Rural Electrification Administration and launched the creation of an electric infrastructure. By 1953, the statistics were reversed: Only one of every 10 rural homes was without electricity.

Now, the game has new rules. In 2007, Congress passed the Energy Information and Security Act to create a smarter electrical grid. This new smart grid will be engineered to automate and streamline power distribution and outfox potential security threats, all while working more cooperatively with its neighbors. The latter is especially important for a grid that’s been built in a piecemeal fashion to span a growing nation, yet still needs to distribute no-fail power efficiently to an increasing number of customers.

The monumental task of updating an outdated grid has fallen to the 930 electrical cooperatives that distribute power throughout the U.S. It’s a bit like asking your IT person to rebuild a room-sized 1944 Harvard Mark-1 calculator to function like an iPad. The good news is that dozens of cooperatives have picked up the gauntlet. Beginning in the next section, we’ll take a closer look at five cooperatives that are exploring ways to prevent outages, protect supplies and improve efficiencies.

Years before "smart" and "grid" were synonymous for projects designed to modernize electrical services in the U.S., Vermont Electric Cooperative began making a few forward-looking improvements. In 2001, it began installing smart meters in customer homes as part of its search for high-tech ways to improve reliability and delivery.

Why are the meters so brainy? The digital meters alert the co-op to outages and save the expense of employing meter readers to gather meter stats. A GPS system built into the meters provides the cooperative’s control center real-time data that shows which homes have had power interruption. Field workers also can access the information using secure laptops.

According to the cooperative, a minor power outage that used to require at least 20 employees to solve now takes only a few. Plus, the time that customers are without power has been reduced by 40 percent. The smart meter data can be put into report form to study -- and potentially improve -- system performance. These improvements contribute to the fact that as of August 2011, the Vermont Electrical Cooperative had bested the outage prevention rates of all major Vermont utility companies.

One of the biggest downfalls of the United States' current electrical grid is that it doesn’t always efficiently distribute power. That’s why highly populated areas can experience a brownout, or a reduction in electricity availability, during times of extreme usage. When temperatures soar in Columbus, for example, and consumers crank up the air conditioner, it taxes the current electrical grid.

American Electric Power, an Ohio-based cooperative, has launched a smart grid project to store excess energy and reduce shortages during peak usage times. And, instead of simply sending out a news release about the ways its customers can benefit, the cooperative created a gridSMART mobile exhibit to illustrate ways the fledgling program saves energy and money. The interactive stations allow consumers to compare smart meters with traditional meters, test their electricity-related knowledge and discover how American Electric Power is keeping their lights on -- even when everyone’s trying to keep their home a balmy 68 degrees in the summer.

The Pecan Street Project began as an initiative of Texas-based Austin Energy, which in 2009 received a Department of Energy grant to encourage electric cooperatives to demonstrate smart grid technology in real-world settings. And, thanks to matching funds, the Pecan Street Project -- named for one of Austin’s better-known thoroughfares -- was able to put $25 million toward developing, testing and implementing this new smart grid technology.

As part of the study, the Pecan Street Project created a web of smart-grid connectivity between 200 homes and several commercial businesses using smart meters that key into trending usage. The meters also provide feedback to customers. Customers can view and analyze their electrical usage by the hour, day or month. What’s most unique, however, is that the project includes the ongoing installation of enough electric vehicle charging sites that Austin could become the electric car capital of the U.S. In fact, participating residents have been offered deep discounts by Pecan Street and Chevrolet to lease or buy the electric-powered Chevy Volt. Pecan Street will monitor what effect the vehicles have on each household’s electricity usage.

Hawaii is the most fossil fuel-consuming state in the Union, and it has to import most of its energy sources. Not only does this make its electricity more expensive, but it’s also more difficult for an electric cooperative to anticipate and adjust to fluctuations in demand. However, a smart grid project by Hawaii Electric may have consumers in Maui’s Wailea, an isolated luxury resort community, thinking twice before firing up power-hungry household appliances.

Hawaii Electric is counting on a pilot program that will install wall-mounted meters to track the amount of power used by household appliances. Watching the kilowatts zip by would probably be incentive enough, but this smart grid tool tells customers how much electricity their neighbors are collectively using, too. For example, instead of running the clothes dryer at 2 p.m., if demand is highest and electricity is most expensive around that time, consumers could delay pushing the start button until the smart meter shows them that demand is waning and electricity is cheaper to use. By 2012, Hawaii Electric expects electricity use to decrease by as much as 15 percent.

It’s no secret that there’s plenty of sun in Arizona, but now those golden rays may help residents lower their utility bills. Arizona Public Service has partnered with GE and plans to use solar power to partially fuel its new smart grid.

The project will start with rooftop panels on houses and businesses, as well as a new solar park. Together, the panels should generate 1.5 megawatts that can be distributed to customers. The key, according to researchers, will be figuring out the most effective ways to feed solar juice to the smart grid. The good news for customers is that the project will subsidize the start-up costs to install the solar panels and secure them a low fixed rate for electricity use for the next 20 years. By then, maybe we’ll have figured out ways to generate and distribute power in cheaper and greener ways -- with the help of clever smart grid cooperatives like these, of course.