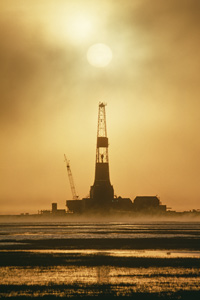 Harald Sund/­Getty Images
The skyline at a nearby oil rig in Prudhoe Bay, Alaska. Will the ANWR skyline look like this in the future?

­Directional drilling uses a small motor that goes into the hole behind the drill. The motor can be remotely operated and send back information to the operator about the rock conditions. The operator can then issue commands to the motor as to which direction to drill. Furthermore, the casings that keep the hole open are flexible. The record for directional drilling is reaching an oil field 6.6 miles (10.6 kilometers) away from the platform [source: Pratt]. The overall impact of directional drilling is that multiple wells can be drilled from the same platform and that smaller platforms can be used. Proponents say that these factors will reduce the impact of oil drilling on the land. But even if you reduce the number of wells, won’t individual oil platforms disturb the tundra beneath?

The tundra surface is frozen almost entirely throughout the year. However, a small upper layer melts during the arctic summer. So, how can you place an oil rig on the surface without disrupting it? One solution is to suspend oil platforms on ice platforms. In this way, the oil rig won't disturb the surface or melt the permafrost. Alternatively, oil companies have been experimenting with the idea of using offshore oil-type platforms on land to reduce the area of the platform that contacts the surface. While these types of platforms may be successful, there's more to an oil rig than the rig itself.

First, for each platform, there must be access roads. Roads are necessary to bring in construction equipment, as well as supplies for the oil rigs and the workers. Building these roads likely would disrupt the tundra. To reduce the impact, access roads are often made of ice, and these roads have been successful in many areas of the Arctic. However, ice roads may be difficult to make in the hilly terrain of Area 1002 and could only be used during winter months. In nearby Prudhoe Bay, some gravel roads have replaced ice ones and may be necessary in Area 1002. Opponents fear that gravel paths would have a larger environmental impact.

­Second, there must be some way to ship the extracted oil from the rig. Pipelines or tanker trucks are the typical methods. How much room will the roads and pipelines take up? Proponents of drilling commonly contend that oil operations will only take up 2,000 acres (809 hectares) compared to the 1.5 million acres (607,028 hectares) of Area 1002 or the 19.6 million acres (7.9 million hectares) of ANWR. However, opponents point out that this figure doesn't include the area ­enclosing the roads or pipelines necessary to access the rigs and transport the recovered oil. Opponents contend that Area 1002 would be despoiled by the "sprawl" of oil platforms and their necessary infrastructure.