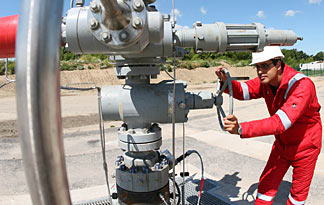 How much do you know about carbon capture?
iStockphoto/Thinkstock

Jesse James, Billy the Kid, and Bonnie and Clyde have nothing on carbon. Released into the atmosphere, this atomic desperado holds a six-shooter to the Earth's thermostat, warming the globe and causing climate change. That is, until carbon capture became the new sheriff in town. With a hard-riding posse of technological tools, carbon capture has deadly carbon in its sights.

The major source of man-made carbon is combustion, and the most common thing humans burn are fossil fuels for energy production. Therefore, the idea is to grab this CO2 gas before it heads out the power plant door into the atmosphere. The process is called carbon capture (the second step is called carbon sequestration, where the captured carbon is imprisoned deep in the Earth or the ocean where it can no longer be a menace to society).

There are a number of ways to capture carbon. Keep reading to learn about a few examples.

The Shwarze Pump power plant in Spremberg, Germany, heats a steam boiler with über-polluting lignite coal, according to Scientific American. Only, instead of burning the lignite in air like most plants would, the Schwarze Pump burns it in the presence of pure oxygen, limiting the byproducts to water vapor and CO2. In 2006, the power plant installed one more step between lighting the lignite and releasing its byproducts: a pipe. Inside this pipe, the water vapor condenses into liquid and is siphoned off, and the carbon dioxide gas is left pure to pass through to the pipe's exit. Later, the plant pressurizes the CO2 gas, which, as you might remember from high school chemistry, turns gas into liquid. This liquid carbon has uses ranging from putting the pep in Pepsi to blasting the final oil deposits from drying wells. (Environmentalists point out that it would be better still to refrain from burning lignite in the first place.)

Another carbon capture method involves passing exhaust gasses through chemicals that pull out the CO2, according to the University of Strathclyde in the U.K. [source: University of Strathclyde, UK]. In this process, flue gasses from a power plant go through a filterlike "scrubber" containing an industrial solvent like Selexol. The solvent greedily sucks up the CO2 and then the solution passes through a heat source, boiling off the solvent and leaving the pure, liquid CO2 behind.

Technically called cryogenic fractionation, gas from power plants can be cooled and squeezed until it turns into a liquid, according to MIT. Once you have this chemical soup, it's generally easier to separate out these liquid chemicals than it is their gaseous parents. Unfortunately, this degree of cooling currently requires a lot of energy.

Really, a power plant just burns hydrogen. So, new carbon capture techniques seek to pull the carbon from fossil fuels like coal before power plants burn them, leaving behind the hydrogen needed for combustion, according to the University of Edinburgh. There are three steps: First methane or gasified coal is converted to hydrogen and carbon monoxide. Second, the carbon monoxide is reacted with water to make CO2 and more hydrogen. And finally, the CO2 is separated from the hydrogen and compressed into liquid, which (again) can be either used or stored, commonly by pumping the liquid CO2 into the dry underground chambers of used-up oil wells.

Which carbon capture method works best? Only time will tell.

How Dyson Spheres Work
What Do the Numbers Inside Recycling Symbols on Plastic Items Mean?
Queen Elizabeth II Bans Plastic From Royal Estates