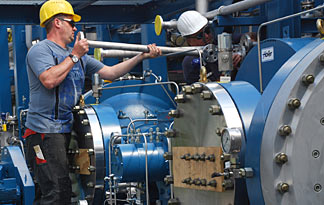 How much do you know about carbon sequestration?
DCI

Admit it: You enjoy emitting carbon. It keeps you warm in the winter, cool in the summer, powers the device you're using to read this article, and gets you almost everywhere you want to go.

In short, nearly everything we do emits carbon and many of these things -- like breathing, for example -- we'd prefer to keep doing. But most scientists agree that all this carbon is putting a fleece blanket around the Earth, warming it up in a way that winds up killing polar bears (who are losing their frozen habitat) and sinking the Pacific island of Kiribati (which is being drowned by rising sea levels).

Therefore, carbon sequestration is a tantalizing idea: If we're not going to stop emitting carbon, maybe we can stick all this carbon someplace else, where it won't hurt anyone.

Look around. Almost everything is made of carbon. This is because carbon is an essential element in every organic compound. When you plant a tree, the structure of the wood, the bark and leaves is made mostly of carbon. So instead of floating around in the atmosphere, it's "sequestered," or trapped, in the tree's biomass.

According to the U.S. Department of Agriculture, an acre of trees sequesters (very roughly) 361 tons of carbon dioxide over 100 years. According to the radio show Car Talk, an average car emits a little more than 6 tons of carbon dioxide every year. So to offset one car's emissions for one year, you'd have to plant roughly 2 acres of trees (and continue doing so every year).

So, while planting biomass is a nice thing you can do today, on a population scale, the math of trees versus carbon just doesn't pan out.

Instead, scientists are looking at other places to stick carbon -- where the sun don't shine -- specifically in oceans, peat bogs and underground.

How you store carbon depends very much on where you're storing it. For example, the Weyburn-Midale Carbon Dioxide Project compresses CO2 emissions from a coal-fired energy plant in Beulah, N.D., into liquid form and then runs this liquid through a 200-mile (321-kilometer) pipeline that stretches underground from the power plant to a pair of huge, empty oil fields in Midale, Saskatchewan. There, the liquid carbon dioxide is pumped into these empty holes deep in the ground at a rate of about 8,000 tons of carbon dioxide per day. Un-minable coal seams, deep pools of non-potable water, and porous deposits of basalt are natural geologic formations also being explored for their use in carbon sequestration.

Another proposed home for the atmosphere's excess carbon is the oceans. Like planting trees, proponents hope to create blooms of plantlike phytoplankton, which breath in CO2 and breathe out oxygen [source: Nature]. However, encouraging these blooms through, for example, the addition of iron-rich fertilizer may have unintended environmental impacts, including potentially lowering deep water oxygen levels, or the growth of algae types that harm sea life. While ocean sequestration via iron fertilization has been tried in experiments (for example, the 2009 LOHAFEX trial in the Southern Pacific), the ecological concerns leave the procedure in the realm of promise rather than practice.

Or take the case of peat bogs. Generally when a plant dies, it releases its carbon back to the atmosphere as its biomass decays -- but not if the plant dies and sinks into a peat bog, like into quicksand. In that case, the peat bog effectively mummifies the plant, keeping its carbon trapped inside.

So, what's the problem?

The problem with carbon sequestration is the cost. But a paper by MIT economists Jeremy David and Howard Herzog concludes that, "with new developments, CO2 capture and sequestration can become a cost-effective mitigation pathway." In other words, wait a couple years for technology to catch up, and sequestration will not only be possible, but practical. Another report by the U.S. Department of Energy's Office of Fossil Energy details the costs in depth, showing that carbon capture and sequestration in geologic formations is possible from a coal power plant at only a 10 percent increase in the cost of energy, as long as the pipeline from plant to sequestration site is less than 50 miles (80 kilometers) long.