Browse the article How will clean energy help future generations? 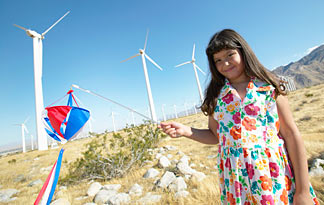 Henry County, Ill., prides itself on its hog, soybean and cattle farms. There’s a lovely farmers’ market every September in Kewanee, and for the culturally minded, a theater in the round in Geneseo. But in recent years this rural stretch in the land of Lincoln, some 16 miles (25.75 kilometers) from the Mississippi River, has become prominent for another reason: green energy.

Call it, green, clean or renewable; Henry County has effectively used alternative energy to spur economic development. With two ethanol plants, 133 wind turbines under construction and an additional 134 in the offing, Henry County has become a model of America’s clean energy industry. The payoff has been immediate as the community boasts an unemployment rate of 6.9 percent, far lower than nearby counties.

As America tries to wean itself off expensive foreign oil while creating jobs at home, alternative energy has become one of the most debated issues of the 21st century. Although critics charge that the myriad of promises about going green are a mirage, others argue the benefits are real, especially for future generations.

The problem is that for centuries we humans have been burning fossil fuels, such as oil and coal, to power our lives. When those fuels burn, deadly heat-trapping greenhouse gases, including carbon dioxide, spew into the air resulting in air pollution and massive changes in Earth’s climate and environment -- global warming. As global warming worsens, look for more severe droughts where water is scarce, and more catastrophic floods where it is not.

Replacing fossil fuels -- which will eventually run out -- with alternative sources of energy can help stop this environmental issue. A 100-megawatt wind farm, for example, can generate enough electricity to power 24,000 homes annually, the same as a coal-fired power plant burning 50,000 tons of coal. To put that in perspective, that coal-burning plant emits 2.095 pounds (.95 kg) of carbon dioxide for every kilowatt hour of electricity it generates.

The Future is Now

Experts say clean energy can keep foreign countries from holding other economies hostage. Since the United States depends on the dwindling supply of foreign oil for its survival, the nation’s economy is vulnerable to volatile prices changes, terrorism and fuel supply interruptions. Clean energy, which for all intents and purposes is bountiful and produced domestically, is not subject to such manipulations.

In addition, replacing fossil fuels with wind, solar and other forms of clean energy means that future generations will not have to go to war to protect America’s energy supply. Experts say if our energy policy does not change, by 2030 the United States will have to import two-thirds of its oil supply from the Middle East and Asia, creating a bee’s nest of future foreign policy problems.

In the here and now, and as the people of Henry County, Ill., have found out, green energy means more green in everyone’s pocketbooks. As America shifts to renewable energy, experts argue that hundreds of thousands of jobs -- the numbers vary -- will be created. Backed by government incentives, many companies are beginning to take the nascent steps to build a workable green economy. And these jobs are likely to last for years, and could provide a wealth of public and private benefits, such as reducing poverty and providing health care for millions.