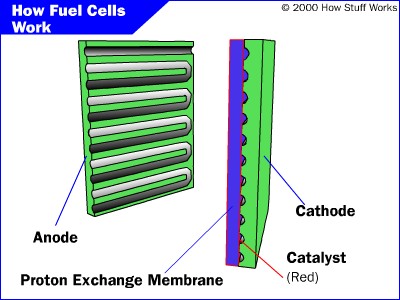 Nanoparticle catalysts could have a huge role to play in fuel cells.
© HowStuffWorks

We can't say whether you've sat biting your lip over the question at hand, but we'd be willing to gamble that you have had a passing question about when alternative fuels would be more readily available, or when you'd be able to get better mileage on your commute. So let's dig down to the practical applications of this question.

Nanoparticles are ultrafine units of matter that measure no more than 100 nanometers in length, width or height. They have a part to play in fuel cells -- and their potential replacement of combustion engines. Fuel cells produce electricity through a chemical reaction, and nanoparticles can serve as the catalysts that facilitate those reactions.

So we can all go home now, as that all makes perfect sense, right? Not quite.

These minuscule bits are particularly useful in industrial applications like fuel production, which require durable catalysts. Nanoparticles fit the bill because they have a relatively large surface-area-to-volume ratio, which means the reactions can happen faster (more surface to react) [source: Birch]. And because they're so teeny tiny, you don't have to use much.

One of the nanoparticles most often employed as a catalyst for fuel cells is platinum. It's a good candidate because it works fast in a reaction and is thought to be fairly stable [source: Bond]. But platinum is really expensive on an industrial scale, even if you're only using nanoparticles of it, and it does gradually break down. Scientists at Brown University recently discovered that a cobalt nanoparticle catalyst worked nearly as well as platinum but proved a lot more durable.

What does that mean to you? Well, along with being expensive, platinum is a precious metal because it's not abundant. A catalyst using nanoparticles of something like cobalt could make fuel cells a much more viable option -- cobalt is readily available and inexpensive. So it could help create more fuel cells, which would lessen the demand for fossil fuel production.

But that's not the only ability nanoparticles have when it comes to fuel production. Cerium nanoparticles have also begun to be added to certain fuels to make fuel combustion more efficient. The element helps oxidize carbon at a lower temperature than diesel engines usually need; that means they can use less fuel and results in less soot [source: EPA].

But adding cerium might mean we're just increasing a different kind of pollution -- cerium pollution. So far, researchers at Marshall University in West Virginia have shown that cerium nanoparticles can travel from the lungs to the liver, producing liver damage. Because this cerium is in nanoparticle form, it has the potential to enter our lungs much more easily than bigger particles like soot. After all, it's only about 1/40,000 times as large as the width of a human hair [source: Marshall University].

So while nanoparticles can change fuel production in many ways, we have to make sure that we're not changing it for the worse (or just swapping one evil for another).

As someone who doesn't ponder the complexities of nanoparticles, I will grudgingly admit that I probably should have. These tiny little bits of matter are being robustly added to not just fuel but food and cosmetics. We don't yet know exactly what they do to the human body, but we should probably find out sooner rather than later.