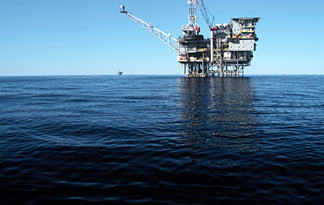 How much do you know about deep sea oil scanners?
iStockphoto/Thinkstock

Let's take a quick second to talk about what a deep-sea oil scanner does. It sends out a laser beam toward whatever needs to be scanned underwater — usually an oil rig and the surrounding sea floor. The beam bounces back, the scanner receives it and the scanner processes the beam. Each beam that bounces back is stored as a point; when a bunch of beams have bounced back, a picture of the underwater object and its surroundings emerge.

The scanner can map hundreds of points per second; a scan can take five to 15 minutes, depending on the size of the object being scanned and the image resolution needed. If the scanner is close to the target object, going more slowly, and mapping, say, 100 points per second, it can be very precise in the image it returns, with an accuracy of plus or minus 1 to 5 millimeters (.03 to .19 inches).

If the scanner is being asked to create an image of something much larger, it would need to be farther away from the object and send out quicker laser beams. This type of scanning is accurate to plus or minus 10 millimeters (.39 inches) — still pretty precise.

Some scanners use sonar rather than lasers, but the idea is the same: send out a signal (this time sound rather than light), receive the signal and create a set of dots that map the object scanned. Sonar scanners and laser scanners have a similar precision, though sonar scanners sometimes do better in cloudy water.