What are drill ships? 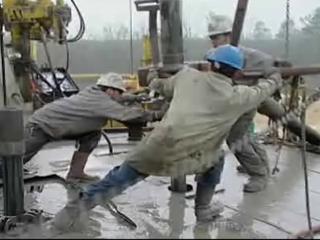 Oil companies use sonic equipment to search for oil that is located deep beneath the ocean's floor. Once they decide exactly where they want to drill, they use a MODU, or mobile offshore drilling unit, to dig the well.

A drill ship is a particular type of MODU that is composed of a ship with a drilling rig on its top deck. These ships can go right to the drill site. To remain stabilized, they use propellers and anchors to correct for drift while the drilling is taking place. The drill in the drill ship operates through a hole in the ship's hull. Unlike some other kinds of MODUs, drill ships can operate in deep water.

A drill ship and other types of MODUs use something called a riser to drill down into the ocean floor. This is how drilling fluids can pass from the ocean floor to the rig. Engineers then lower a drill string (a string of 30-foot/9.1-meter pipes) down through the riser. At the sea floor, a BOP (blowout preventer) clamps off the pipe in case of a blowout. Metal casings lined with cement walls are used to stabilize the well and keep it from collapsing. When a drill ship or any other kind of MODU hits oil, the well needs to be plugged up. Engineers put down one plug, which is held down by seawater or drilling mud until they can put a second one in place. After they cap the well, a permanent rig comes in to capture the oil, or in some cases the MODU is converted to a production rig and does the capturing itself.

Have We Hit the Peak Recycling Point?
Could Salter's Duck have solved the oil crisis?
How Glaciers Work