How does drilling for oil in the Arctic work? 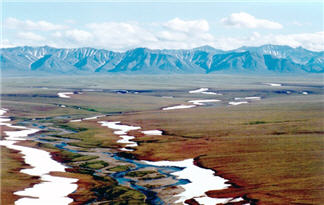 How much do you know about oil drilling?
iStockphoto/Thinkstock

Like all offshore drilling, drilling in the Arctic is more costly, complicated, and politically controversial than drilling for oil on land. A wellbore is drilled through the seabed, first for exploratory purposes and then to serve as the drilling site for extraction.

Once the wellbore is installed and the temporary equipment used for installation is removed, a “christmas tree,” the most visible part of an active well, is installed. This sits on top of the well’s casing and allows for monitoring and regulation of pressures and oil flow from the well. It is comprised of tubes and valves that control the flow of oil out of the well, and its many pieces create the appearance of a tree -- hence its name.

The installation of drilling wells in the Arctic is accompanied by the construction of ice roads, an ice airstrip, and the drilling pad itself will be several acres large. Large amounts of water are consumed in the process; the Bureau of Land Management estimates that eight to 15 million gallons are consumed over about five months for drilling, development, and construction of the ice roads. Surface reserve pits used to store the wastes produced by the drilling process, but those have been largely replaced by methods of re-injecting the waste into the ground, according to the U.S. Fish & Wildlife Service.

Until about the 1970s or 1980s, most oil wells were vertical, but reservoirs of underground crude oil, called hydrocarbons, tend to be horizontal. According to Arctic Power, an organization devoted to oil exploration in the Arctic National Wildlife Refuge, horizontal drilling techniques have revolutionized the drilling process in the region. Horizontal drilling increases the production rate of a well because it has greater surface area and because it allows access to oil miles away and in hard-to-reach areas. Arctic Power says that 90 percent of the wells in Prudhoe Bay, the largest oil field in the U.S., are horizontal.

Arctic Power promotes other drilling techniques, including through-tube rotary drilling, which allows the production tubing of an old well to be used again for a new well.

In 2005, President Bush said in a push for drilling in ANWR that the region’s oil could be extracted by drilling on just 2,000 acres of the refuge. NRDC disputed that claim, saying that because the oil is distributed throughout 1.5 million acres of coastal plain, data it attributes to the U.S. Geological Survey, full extraction of that oil would require infrastructure of drill sites, pipelines, roads, and gravel mines that alone would occupy 12,000 acres -- but which in total would be spread across more than 640,000 acres.

Opponents of drilling for oil in the Arctic are concerned about the extreme conditions -- icebergs, freezing weather, deep water -- in the area, which has never been drilled for oil to the extent that is being pushed now. And for Peter Wadhams, a University of Cambridge ocean physics professor, the primary concern is that in the case of a spill -- or just an undersea leak -- oil will interact with surface sea ice in ways no one has experience either witnessing or cleaning up. The Independent explains that Wadhams believes oil will become absorbed in that ice and be transported for up to 1,000 miles across the ocean and if such an incident occurs during colder months, would not be released until spring, at which point it will deliver oil to unpredictable areas of the Arctic and also be more toxic to those ecosystems and wildlife because the ice has protected it from weathering. He is certain about these predictions because he has done experiments specifically on how oil interacts with the frozen sea.

Shell, which has the most aggressive plans for drilling in the unknown Arctic, has said that it would be able to clean up 95 percent of oil spilled in the Arctic. As the Christian Science Monitor points out, this success rate has never been achieved in an oil spill anywhere before, and mechanical recovery after the BP spill in the Gulf of Mexico was about three percent. Experts have trouble believing that a new record will be set in an area that is so remote, little-understood, and physically among the harshest of environments in the world.