What is the energy source of the future? 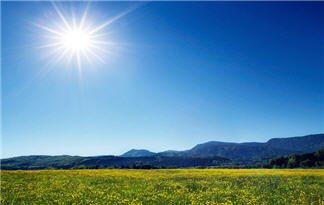 There are, as you're probably aware, a host of enormous problems with the conventional fossil fuels -- coal, oil, and natural gas -- that we've relied upon to power our societies since the Industrial Revolution.

For one, they're running out: Some analysts believe we've already hit peak oil, and that global production will more or less decline from here on out. And while there's considerably more coal and natural gas, they're still extremely finite resources, and experts can already foresee 'peak' coal and gas, too. Secondly, burning fossil fuels emits both particulate air pollution and greenhouse gases. The former is strangling cities around the world with smog, and the later contributes to the climate crisis: these heat-trapping fossil fuel byproducts are the single largest contributor to global warming.

So, the race is on to replace them with an energy source of the future. Clearly, it ain't fossil fuels. But unfortunately, there's unlikely to be any single source of power that will emerge to definitively take the place of hydrocarbons. There's no 'free energy', no magic bullet.

Instead, the energy of the future will need to be generated by a patchwork of renewable sources: wind, solar, geothermal, hydro, and yes, nuclear power, will probably all play a role in generating the electricity of tomorrow. (And yes, I say electricity, because the internal combustion engine and other gas-powered motors will be phased out along with fossil fuels)

First up is solar. Solar is by far the most promising; it's the sector that everyone is desperately hoping, crossing their fingers, praying that technology continues to improve the most dramatically. Why? Because sunlight is by a long shot the most abundant power source on the planet. Enough energy falls on the earth's surface in the form of sunlight in a single hour to power all of modern civilization for a year.

Because of this, researchers are working overtime to improve the efficiency of solar panels, to improve their energy returned on investment (EROI), and to make producing them cheaper. The technology is indeed improving fastâ€“Moore's law, which states that, in computing, "the number of transistors that can be placed inexpensively on an integrated circuit doubles approximately every two years," has been shown to more or less apply to the trajectory of improvement of solar power.

As such, solar is springing up around the world, both in large, centralized arrays, and in smaller, distributed projects like rooftop panels and solar water heaters. Countries that recognize the importance of solar are promoting it domestically; Germany, for example, has used a feed-in tariff program that rewards solar owners for plugging their individual panels into the grid. By the end of 2011, it is expected to install 5,000 MW of new projects. Elsewhere, a massive solar array planned for the Sahara desert is on its way to construction now -- by 2050, it alone could meet 15% of Europe's total power demand.

Wind power will be nearly as important in coming years. It's perhaps the most established renewable energy source (besides hydro), and is just as cheap as fossil fuels in many markets around the world. Yet as of now, it only meets an estimated 2.5% of the world's power demand. But that's changing. Wind farms are being deployed around the globe -- famously, in Texas and the Great Plains, right here in the U.S. Iowa now gets 20% of its power from wind turbines. And right now, almost all wind projects are onshore. But the true energy bounty lies offshore, where winds are stronger and there are fewer restrictions on development. For instance, analysts have calculated that there's enough offshore wind potential to power Europe seven times over.

Hydro power, usually generated by dams, where rivers turn mighty turbines within, has been around for ages. It currently supplies around 8.25% of the world's power, and will likely continue to do so moving forward. And, of course, there are other emerging renewable technologies that can play a significant role. Chief among them, geothermal power, which harnesses the vast heat rising out of the earth's crust. The potential for this technology is vast: Google-funded research reveals that geothermal could generate 10 times the amount of power than that of all of our currently operating coal plants combined. Some predict that geothermal projects will one day produce as much as a sixth of the world's energy. There are others, too: wave power, which is pretty much exactly what it sounds like, is a nascent technology, but a promising one.

Finally, any discussion of the world's energy future must hit on nuclear power. It meets 13-14% of the planet's power needs, and will likely remain in the picture despite tragedies like the Fukushima meltdown. Since it's also a politically popular energy source (if not a publicly popular one) it is positioned to play a significant role in producing carbon-free power as the world moves to address the climate crisis. Expect more nuclear power plants going forward, but not many -- they are likely to be eclipsed by safer, truly renewable sources as wind, solar, and geothermal become more and more viable.

So. This is what the energy source of the future will be: Not any single fuel, not some mythical Energon cube, but a mishmash of competing clean technologies that currently don't even constitute half of the world's current power mix. In other words, we have plenty of good options. And none of them are fossil fuels.

Now, the bigger question is how soon these future energy sources will reach dominance. If we hope to avoid dangerous levels of global warming, it had better be soon. In this sense, the future of energy is utterly dependent on the collective will of us humanfolk. Will we decide to turn away from the polluting fuels of the past and to embrace low-carbon technologies? Or will we continue to behave as though the energy source of the future is the mighty hydrocarbon, as we have done for our entire industrial history? Only time will tell: the future, of course, is something of a tricky thing to predict.