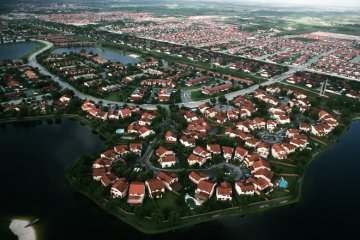 Comments by two politicians in the past few years have raised a long-dormant debate over oil drilling in South Florida’s huge freshwater wetland. What many people consider a precious natural treasure and home to rare and endangered plants and animals – also sits atop an unknown amount of petroleum.

In fact, nine wells have been pumping oil from a small section of the Everglades since the early 1940s -- low-grade crude used for lubrication and paving roads.

During a campaign visit to Florida in 2011, GOP presidential candidate Michelle Bachman said last week that she would support limited oil drilling.

"The United States needs to be less dependent on foreign sources of energy and more dependent upon American resourcefulness. Whether that is in the Everglades, or whether that is in the eastern Gulf region, or whether that's in North Dakota, we need to go where the energy is," she said. "Of course it needs to be done responsibly. If we can't responsibly access energy in the Everglades then we shouldn't do it."

Florida’s Republican Governor Rick Scott told business leaders in Tallahassee that he would support “a cautious expansion” of oil drilling, but his office retreated a few hours later on his statement. Still the tempest raises the question: could oil companies drill in the so-called “river of grass” without destroying it?

Dave Mica thinks so. Mica is director of the Florida Petroleum Council in Tallahassee and believes new technologies such as horizontal drilling and hydraulic fracturing could be used to pump oil out of the freshwater wetland.

“If you look at our industry, our track record has been excellent in sensitive areas,” Mica said. “I do think we could develop (oil reserves) and hopefully we will.”

The Florida Legislature sparked the drive for oil in the late 1930s when it offered a $50,000 prize to anyone who could find oil in the state. Humble Oil Co., the forerunner to Exxon-Mobil, struck oil with a wildcat well in 1943 in southwest Florida, Mica said. New York advertising mogul and real estate developer Barron Collier began drilling in the western edge of the Everglades, and Collier Resources, a firm run by his heirs, continues small production today.

Edward Glab, professor at Florida International University and an expert in oil and gas drilling, said the reserves are low-quality and may be hard to clean up.

"The question in my own mind is whether the juice is worth the squeeze," Glab told Minnesota Public Radio. "[The Everglades] is an extraordinary important and fragile ecosystem... There are other places we could go that would be far less risky with greater quantities of oil."

The Everglades has a history of abuse by agricultural and real estate development over the years and much of its wetland habitat has been drained. The federal government, led by the U.S. Army Corps of Engineers, has embarked on a $15 to $20 billion restoration of the Everglades that includes rechanneling waterways to replenish these freshwater supplies Lake Okeechobee and other sources to the north. Any hint of oil drilling in this unusual ecosystem doesn’t sit well with the state’s environmental community.

“Absolutely not,” said Jonathan Ullman, a spokesman for the Sierra Club in Miami. “There are all kind of reasons. It’s a preserve and the expansion of roads would be as damaging as getting the oil out. It’s not a clean thing. Its putting more industry in a natural area, much of which is wilderness.”

Ullman said the Everglades is the also home to 120 or so Florida panthers, one of North America’s most endangered mammals, along with rare plants, orchids, birds, as well as serving as a nursery for many species of fish and aquatic life along the southern tip of Florida.

Collier Resources retains mineral rights to a portion of the Big Cypress National Wildlife Refuge, despite attempts by the Bush Administration to buy them out in 2002. Congress failed to pass the $120 million buyout.

Ullman says he hopes the state’s current leaders will pull the plug on any new discussion of drilling.

“It comes up every few years,” he said. “But we don’t want to be fighting this constantly.”

With political pressure to find new sources of oil in North America, such as the tar sands of Alberta, Canada; offshore in the Gulf of Mexico, or the Arctic wildlife refuge, it’s not clear Ullman’s wish will come true.