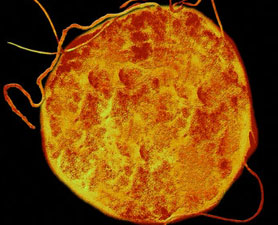 A trove of unique extremophiles were found at the bottom of the 7,800 foot-deep Homestake Gold Mine in Lead, S.D.
Corbis Images

Extremophiles are tiny microbes that are able to thrive in hot, salty and even acidic or gaseous environments that would kill other forms of life. Now scientists are using these hardy dwellers of the seafloor and hot springs to produce biofuels like ethanol more efficiently and at lower cost.

These heat and salt-loving microorganisms are good at breaking down biological material like wood chips, waste crops or other sorts of plant material. They also literally "take the heat" when it comes to punishing industrial processes. Until recently, researchers have had trouble culturing these wild-growing extremophiles and harnessing their properties. But recent advances have allowed them to turn them into bio-powered refineries.

"I believe they will be a big generator for energy in the near future," said Rajesh Sani, assistant professor of biological and chemical engineering at the South Dakota School of Mines and Technology. "We had some trouble at first, but in the past five years, we've learned how to culture them. Now they cooperate and grow nicely with us."

Sani and his colleagues cultured the Geobacillus bacteria and used it to break down corn waste and cord grass from solid to liquid at nearly 160 degrees F. This fermentation process has long been used to produce biofuels -- and beer -- but now it can be done in fewer steps, using less water and smaller reactor vessels, explained Sani.

"We are trying to eliminate some steps to make it more cost effective," Sani said.

The results of the experiment were published in the August edition of the journal Extremophiles. His research and that of dozens of other scientists will be discussed at two big conferences this month in Yellowstone National Park and at the University of Georgia.

With concerns over food security, and new mandates by the US and European governments to use more biofuels, researchers are ramping up their efforts to find new ways to turn plant material into fuel. Barny Whitman, a microbiologist at the University of Georgia, says researchers are still understanding how extremophiles make enzymes under tough conditions.

"At higher temperatures, (chemical) reactions go faster and the catalysts are more stable," Whitman said. "It's generally cheaper to run (a reactor) at high temperature rather than low temp because cooling is more expensive and a lot of these reactions generate heat."

Whitman's research is focused on identifying ancient forms of life called archaeobacteria that make methane gas. He believes they could eventually be used to turn sewage or municipal waste into a usable fuel.

One of the pioneers of extremophile biotechnology is also speaking at the Georgia conference. Eric Mathur, vice president for research at SG Biofuels in San Diego, isolated genes from a bacteria growing on deep-sea hydrothermal vents, and then transferred the genetic material into corn plants more than a decade ago. Now he's found the ultimate extremophile -- a desert shrub called jatropha whose seeds produce a compound that is 40 percent oil. The firm has jatropha plantations in Guatemala, Brazil and India and is selling its jatropha-powered mixtures to European airlines that are under the gun to run on biofuel.

Mathur said researchers would do well to expand their search for biofuel-producing catalysts that are rugged, stable and can thrive under pressure.

"I look at extremophiles as a broad term to describe organisms that can survive in conditions where others can't," Mathur said. "The plants we work with now are extremophiles. They are crazy plants that live outside the window of arable land."