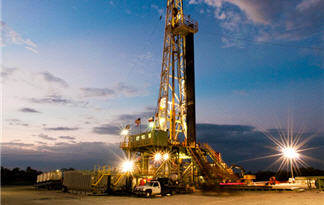 How much do you know about gas extraction?
iStockphoto/Thinkstock

Beneath the surface of a large portion of North America, buried in ancient bedrock, is a massive reserve of natural gas. This gas, however, is locked in shale and cannot simply be drilled out. Instead, a process known as "hydraulic fracturing" must be used.

On the next page, learn about "fracking" and discover why people are concerned.

Hydraulic fracturing -- commonly referred to as "fracking" -- is the process of hitting shale or other rock with high-powered blasts of fluid. First, wellbore is drilled into the layer of rock. Once this access hole has been established, the pressurized fluid -- usually a slurry of water, sand, and chemicals -- is shot against the rock. The impact of this fluid causes fissures to form, opening new channels for the fracturing slurry to probe and releasing the stored gas in the process.

Fracking has opened new territory to gas exploration, areas that were once thought to be too challenging to be economically viable. Indeed, compared to petroleum, domestic natural gas represents potential reductions in emissions, greater economic stability, and fewer security concerns. For these reasons, it has received political support from the Obama Administration.

At the same time, fracking has raised many concerns. First of all, is the threat it poses to local groundwater resources. Fracking is also a potential trigger for earthquakes and has been linked to seismic events in North America and elsewhere in the world. Finally, there is concern over the emissions generated by the fracking process itself. Recent studies have estimated that the carbon footprint of shale-gas extraction is as much as 20 percent higher than originally thought.

In the end, shale-gas extraction--like expanded nuclear power generation and "clean coal" -- may be a necessary, if unpleasant, step forward in a world without oil unless clean alternatives are more proactively developed.