Browse the article Germany's Power Prices Go Negative, But Who's Getting Paid? 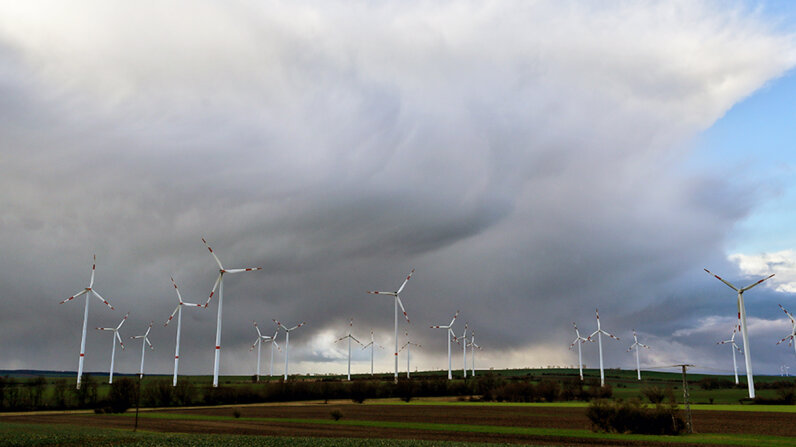 Clouds sweep over a field with wind turbines on Jan. 3, 2018 near Bischofsroda, central Germany. Just a few days earlier on Christmas Eve and a portion of Christmas Day, power prices in Germany plunged below zero. JAN WOITAS/AFP/Getty Images

The most wonderful time of the year can be really rough on your wallet. There's the gift-buying, the travel expenses and the occasional Christmas tree price hike. Yuletide electric bills are a particular source of dread for many families, especially those who go all-out on their light displays.

But in December 2017, some utility users in Germany got a welcome stocking-stuffer. Due to the country's clean energy infrastructure, there was an electricity surplus on most of Christmas Eve and a portion of Christmas Day. So, thanks to green power, people were more or less paid to use electricity during the holidays.

What happened? Was it a Christmas miracle? Hardly. Actually, in recent years, this sort of thing has become a semi-regular occurrence in Deutschland.

Over the past two decades, the German government has taken strong measures to incentivize the use of renewable energy. By 2040, the nation plans to reduce its greenhouse gas emissions by 70 percent (relative to the levels they were at in the year 1990). To put it mildly, this is an ambitious goal — one that was complicated by Germany's 2011 decision to start phasing out nuclear power.

To help meet its carbon footprint resolutions, the government has doled out roughly €180 billion — or roughly $222 billion — in renewable energy subsidies since 2000. An interesting side-effect of this is so-called "negative pricing."

Sometimes, the price of electricity in Germany falls below zero. When that occurs (as it did on Christmas 2017), the producers of electric power end up paying certain consumers to use the utility.

Right now, renewables like solar and wind energy provide 35 percent of Germany's power. Meanwhile, coal and nuclear plants are still being used. These facilities all share the same electrical grid, which is the system that transports electricity from plants to users.

And therein lies the issue. Prices for power on the German market are determined by supply and demand. On the power grids, the electrical output also needs to match the demand for power. Problem is, demand for power is always fluctuating. During the day, people use more electricity than they do late at night. Likewise, power usage goes down on weekends and holidays, when factories are closed and office buildings vacated.

If a grid doesn't distribute enough electricity in an hour of high demand, blackouts can occur. But what happens when the situation is reversed? In other words, what if there's more electricity on the grid than people need?

Well, in a perfect world, that extra power would be stored up for later use. Unfortunately, that's not always possible. "Storage technologies are not yet advanced enough [to] store large amounts of electricity, regardless of whether the electricity comes from renewables or other sources," energy policy expert and associate professor at Indiana University Sanya Carley, Ph.D. told us via email. She went on to explain that "hydro-storage [technology] ... in which water is moved from a low reservoir during times of high electricity supply and low demand, and then released during times of high demand and low supply" is a promising option. But such facilities require specific sets of geographic conditions — and to this end, Germany's physical layout is less than ideal.

Renewables present another wildcard. By their very nature, solar and wind power have outputs that fluctuate in accordance to the weather conditions. Thanks to renewables, therefore, the German grid sometimes receives a lot of extra electricity in low-demand hours.

You might be wondering why the traditional power plants (i.e. coal and nuclear) don't just reduce their outputs to offset sudden influxes of green energy onto the grid. According to Scott Burger, a researcher at MIT's Electric Power Systems Center, this strategy doesn't always make economic sense. In an email exchange, he points out that these traditional power plants tend to have "long ramp down periods ... and long ramp up periods."

In some cases, it can take them eight hours or more to shut down completely. Then, the process of starting back up again can take yet another eight hours. More often than not, going through that hassle simply isn't worth it, especially given the fact that supply surges produced by renewables tend to be short-lived.

So when green power overloads the grid, the cheapest option for Germany's electricity producers is paying people to use up that extra juice. Germany can also export its excess electricity to neighboring countries to balance the market.

OK, So Who Got Paid?

At certain points on Christmas Eve and Christmas Day 2017, the owners of factories and other facilities that consume electricity in large quantities received up to €50 (around $60) or more per megawatt-hour. But consumers don't benefit much from these negative prices; that's because only about one-fifth of their energy bills comes from the cost of power — the rest is made up of taxes, fees and charges to use the grid.

By the way, this wasn't an isolated incident. In 2017, Germany experienced negative electricity prices on more than 100 separate occasions. And it isn't just limited to the land of bratwurst and pretzels. Belgium, France, Switzerland and Great Britain have also had to deal with it as well. Hopefully, as renewable energy continues to grow in popularity — and as storage technology improves — Europe's grids will get better at handling the more inconsistent aspects of green energy.

Now That's Interesting
According to the U.S. Department of Energy, the average wind turbine stands over 270 feet (82 meters) high — and their blades are typically around 170 feet (51 meters) long.