What are the latest uses for natural gas? 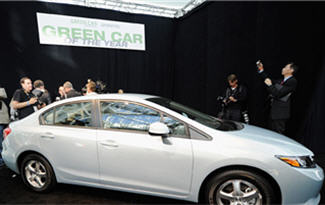 Compared to fuel, coal or good old fashioned biofuels, natural gas is something of a newcomer to the energy sector. But in the last few decades it has rapidly developed and now supplies 24% of energy consumption in the United States.

No longer just used to heat homes, natural gas was first used to produce electricity in the 1990s. While natural gas harvesting methods are under fire for questionable environmental practices, its champions are pushing the envelope, finding uses that will make it not just a way to keep warm, but to power cars, run home appliances and keep the lights on.

Fuel for Our Roads

Vehicles that run on natural gas emit 25% less greenhouse gases into the air than gasoline. They're cheaper to fill up, too, by nearly a dollar per gallon. Natural gas is not a new idea in the automotive industry, but it's one that's starting to take off.

This year, the 2012 Honda Civic Natural Gas was named Green Car of the Year, getting a whopping 240mpg and beating out cars running on electric, hybrid fuel and clean diesel.

You've likely visited or lived in a home powered by natural gas, and cooked with a gas stove (or been fed by someone who does). As the technology advances, natural gas will take on more uses around the home, powering appliances like space heaters, pool and jacuzzi heaters and barbecues, as well as outdoor lights and even air conditioners.

The most exciting technology that's being developed is the natural gas powered fuel cell, which uses a chemical reaction to generate electricity from methane, no fuel combustion or heat necessary.

The result is cleaner, more dependable electricity production, especially when you start using recycled natural gas: Landfills are full of organic matter, which naturally produces methane as it decays. The idea is to dig "wells" in the waste piles, releasing and gathering methane – a much more palatable and environmentally-friendly choice than natural gas hydrofracking.

Innovators in the natural gas industry are working on the concept of "distributed generation" – giving individuals the ability to produce their own electricity, at home. This could be done off-grid, a good choice for homes in secluded or rural areas, or by connecting to the same gas lines that power our stoves.

This is a budding technology, but at least one example has already hit the market. The BlueGen small-scale generator is the size of a washing machine that produces more than enough electricity for the average home and even heats water to boot.

As this sort of technology advances, the uses of natural gas will grow exponentially, creating a possible future in which it keeps us on the move and powered up as well as warm and well-fed.