What is liquefied natural gas used for? 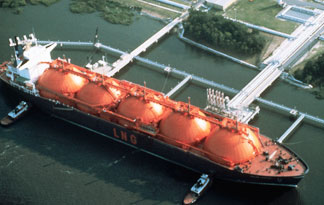 How much do you know about liquified natural gas?
Corbis Images

Natural gas presents an exciting alternative to petroleum because of its abundance and relatively inexpensive price. While it's not a renewable fuel like solar or wind power, it could present a bridge toward a more renewable-based energy future.

Natural gas is gas pumped from the Earth's crust that has been converted into a liquid. When the gas is cooled to minus 260 degrees Fahrenheit (126.7 degrees Celsius), it becomes a liquid that is easier to store. From there, it can be transported in a supertanker, much like oil. Currently, that's the easiest way to move natural gas over long distances. The gas is odorless and colorless, and when burned, it creates far less emissions than petroleum.

Once it is transported in its liquefied form, natural gas is used for a wide variety of purposes like heat and power generation. According to the U.S. Energy Information Administration, 65 million people use natural gas to heat their homes. Natural gas provides 76 percent of the energy for the residential and commercial sectors, and provides 40 percent of the industrial sector's energy needs.

Did you know that natural gas is used to power automobiles, as well? Liquefied natural gas is often converted into compressed natural gas after it has been transported, which makes it more usable to consumers. Cars and trucks that run on compressed natural gas are especially popular in vehicle fleets used by municipalities and businesses. Of course, consumers can buy them too. Honda makes a natural-gas powered Civic sedan that achieves 36 miles per gallon (15.3 kilometers per liter) on the highway, but never uses any actual gasoline.

As of fall 2011, natural gas fuel for cars is far cheaper than gasoline. In California, it costs around $2.10 or so per gallon -- one reason why Honda has seen the sales of its natural gas Civic GX nearly triple this year.