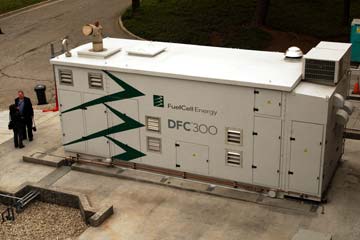 One of the key advantages to the microgrid approach is that it allows local users to make smarter choices regarding their use of power, turning them from cowering subjects under an all-powerful king to empowered consumers in a flexible energy economy. It's the difference, again, between growing a small plot of tomatoes for local use and running an industrialized farm. Which farmer can really claim to have a hand in the rearing of his or her crops?

As previously mentioned, microgrids don't necessarily exist apart from the larger, nationwide power grid. When it makes economic sense, a local community could purchase electricity from outside sources. If prices were to rise, it could all but completely cut itself off from the grid, only using the grid's overpriced juice in the event of local shortages.

Microgrids will not only allow for the optimization of power sources, but also power uses. For instance, a properly equipped microgrid could deal with an energy shortage not by cutting off all power, but selectively killing feeds to certain ends. For instance, the system might prioritize vital communications and healthcare-related energy expenditures, while cutting power to superfluous uses or to appliances such as refrigerators which can usually get by with occasional, short-term power outages.

Another huge advantage to local power production is the optimization of heat energy. Large power plants also tend to create a great deal of unused heat. In fact, between 60 and 80 percent of a typical power plant's energy consumption never becomes electricity. On a local level, however, that energy could be used to heat water for regional use.

Already, cities, industries and military bases around the country are in various stages of implementing microgrid technology -- just one component of a more efficient and dependable energy future.

Explore the links below to learn even more about the future of power production and consumption.