How does natural gas drilling work? 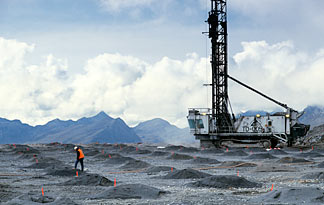 How much do you know about natural gas?
Keith Wood/Corbis

When you switch on your furnace or turn on your gas stove and use the heat from that little blue flame, you’re doing what people in 62 million other American homes do every day, too: You're using natural gas. While natural gas is one way we can heat our homes, cook our food or even power some of our cars and buses, like all sources of energy, it has to come from somewhere. Here’s how natural gas drilling works.

Like all forms of energy drilling, natural gas drilling starts when a deposit of natural gas is found deep beneath the Earth’s surface. To find these deposits, energy company scientists use a variety of methods. They look at the surface geology of an area, the seismic energy (how energy moves from inside the Earth to its surface) and even the magnetic properties of the underground rock formations. Once a likely deposit of natural gas is located, the energy company then drills down to reach it.

Of course, getting gas out of the Earth isn’t easy. A natural gas well isn’t at all like a water well (where you drill a hole in the ground and water fills it). Natural gas tends to be contained within the underground rock itself. The rock must be broken to release the gas. And if it’s brought out the wrong way, it can contaminate the groundwater supply surrounding it. To get the most gas possible, after drilling a hole, energy companies line the hole with materials meant to keep the gas in. Next, they send electric charges down the well, which affect the rock around it. After the charges are set off, a highly-pressurized liquid fracking solution is sent down the well. This solution breaks up the rocks, releasing the natural gas. Since the gas is lighter than the fracking solution, it rises to the top of the well for capture.

While this sounds easy enough, there are still some controversies surrounding natural gas drilling. Some people argue that it releases dangerous chemicals into the groundwater, and can contaminate drinking and agricultural water supplies. Also, once the fracking solution has been used, it’s filled with toxic chemicals. Sometimes it can be recycled into things like road de-icer, but often times its stored deep underground or taken to wastewater treatment plants.

So, the next time you’re relaxing in a toasty warm house heated by natural gas, you’ll know where it comes from.