Powering the U.S. with Earthquakes 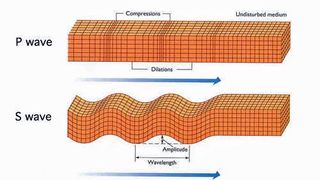 Can earthquakes power the U.S.? Check out these Japan Tsunami and Earthquake pictures to learn more.
DCI

Ever since the big quake swarm started in the Vanuatu area on October 7, 2009, I've been itching to do some number crunching to see how much energy the Earth is releasing through these underground ruptures. I wanted to put the numbers into terms we non-seismologists can understand. Here's what I've come up with:

First of all, let's focus only the top six quakes from the Vanuatu swarm which have been rated at Seismic-waves magnitudes 7.8, 7.7, 7.3, 6.8, 6.6 and 6.5. Normally in the media reports what you hear is how many tons of exploding TNT each quake is equal to, in this case about 14.7 million tons of TNT. That's sure neat, but how many people have an intimate sense of how much energy is released by even one ton of TNT? I'm betting not many, and those who know best are no longer in one piece.

So let's put this into terms we can all understand -- like electricity. It turns out that the US used 526 billion kilowatt hours (kWh) of electricity in 2007 just for lighting, according to the Energy Information Administration. According to my back-of-the envelope calculations, one ton of TNT is equal to 1,162 kWh (I'm a terrible arithmetician, so feel free to jump in and correct me). Multiply that by the TNT equivalent of the six quakes, divide by the 2007 US light kWh, multiply by 365 days in a year and I get almost 12 days of lighting for the US.

That seemed like a lot of power to me until I did the same calculation for the 9.2 magnitude Sumatra-Andaman quake that launched the murderous Indian Ocean Tsunami. Remember, the earthquake power scale is exponential so the energy of that quake was enough to light up the US for more than TWO YEARS. Alas, if only we could actually tap that power.