What is primary oil recovery? 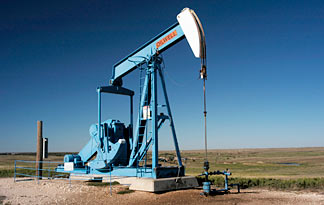 Today, modern society's use of petroleum is ubiquitous, from the materials we produce to the way we get from one place to the next. But imagine the promise petroleum once held: a plentiful, natural resource capable of powering machinery, heating our homes and lighting the darkness. More efficient than steam, cleaner than coal and seemingly limitless, oil must have been a technological marvel. While our day-to-day interaction with oil has become second nature, how much do you know about how it’s produced?

It Has to Start Somewhere

Crude is the term for unprocessed oil that comes out of the ground, the stuff that made ol’ Jed Clampett (from the TV show “The Beverly Hillbillies”) a millionaire. Crude oil is a fossil fuel, which means it’s made up of the decomposed remains of ancient plants and animals. Before crude oil can be refined into fuel, which accounts for about 75 percent of crude use, it has to be harvested. The thing that makes crude oil worth all the trouble is the hydrocarbons it contains. These are molecules made up of hydrogen and carbon that contain a lot of energy, which can be used to power our machinery.

The First and Most Important Step

Primary oil recovery is the first phase, which happens once a well has been drilled from the surface to an underground reserve. Gravity, along with the pressure inside the reservoir, forces the oil into the wellbore. The wellbore is another name for the hole that was drilled to extract the oil. From here, the oil is brought to the surface through mechanical means, like a pump jack. The primary phase of oil recovery continues until the pressure inside the well is no longer enough to produce oil in quantities that make it financially worthwhile.

Primary recovery is an important step in the process because the natural pressure inside the underground reservoir must be equalized before any equipment can be installed. While it’s necessary, it’s not all that effective -- this phase only produces about 10 percent of a reserve’s supply. According to the U.S. Department of Energy, there are 600 billion barrels of oil available within the 50 states. But if primary oil recovery methods were our only way to access these reserves, more than 400 billion barrels would be irretrievable.

When Primary methods are Not Enough

Primary oil recovery is just the first option available to the oil-exploration industry. There are also secondary and tertiary recovery methods, sometimes referred to as enhanced oil recovery. These methods make it possible to access another 40 percent of a reserve's crude supply, and as oil prices increase so, too, does the justification for employing more complex methods.

It Takes a DJ: Healthy Reef Sounds May Lure Fish to Damaged Reefs
The Sahara Desert Is Getting Bigger
Carbon Capture and the Storage Effects of Long-term Use