How safe is natural gas? 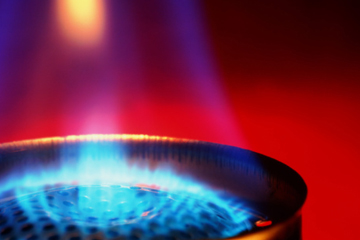 Americans have been using natural gas for decades. It fuels homes and factories, powers our appliances and goes into making products like antifreeze, medicine and explosives. Since 1949, its use and domestic production have risen each year.

But is it safe? Let's investigate.

Did you know that natural gas is naturally colorless, odorless and tasteless? The rotten-egg smell you associate with it comes from mercaptan, a nasty odorant added at processing plants. Because gas is so explosive, the government requires that mercaptan be added so people can detect gas leaks. Calling gas hugely explosive is a bit misleading, though. It explodes only when air and gas meet in just the right proportions. Probably if you smell a leak, it'll just rise to the surface without causing a scene -- though you should still report it. According to the American Gas Association, safety-related incidents have decreased 29 percent since 1988 -- even though natural gas usage has risen 20 percent.

Natural gas emissions also give off less atmosphere-harming carbon dioxide than any other fossil fuel, including coal and petroleum. True, natural gas is composed chiefly of methane, a stronger air pollutant than CO2. But methane makes up only 3 percent of U.S. air pollution, and not even half of that comes from gas leaks. The government regulates drill and refinement companies, which prevent leaks by burning off excess gas. So strictly in terms of air pollution, gas is greenest.

On the next page, learn about the cons of using natural gas.

However, gas can harm land and waterscapes. Sometimes roads need to be built through animal habitats to reach drilling locations. Vehicles can destroy vegetation and soil quality, in turn causing erosion and landslides.

Gas refinement requires pulling water from local streams and rivers. The first threat? Water volume drops, threatening sea life. The second threat? When water gets re-released into the environment, it's been saturated with pollutants. The government monitors and requires permits for this discharge. So in terms of land and water, gas isn't exactly nature-safe.

Advances in technology are helping natural-gas producers reduce environmental disturbances. Recently, a procedure called fracking, which uses hydraulic pressure to crack shale rock and release ancient, trapped gas, has made previously inaccessible reserves cheap to reach. The jury is still out on whether or not fracking contaminates land by introducing chemicals to the surrounding rock. It is possible that fracking contaminates local well water and streams.

But environmentalists might not get the last say on natural gas. Geologists estimate U.S. rock beds hold enough gas to supply the U.S. for at least 100 years. If oil reserves become increasingly politically unstable, natural gas might find its way into our homes, factories, appliances, and products even faster.