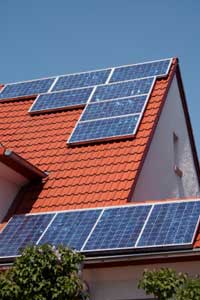 Solar cells might still be a little pricey, but they're getting cheaper year by year.
©iStockphoto.com/acilo

Some people have a flawed concept of solar energy. While it's true that sunlight is free, the electricity generated by PV systems is not. There are lots of factors involved in determining whether installing a PV system is worth the price.

First, there's the question of where you reside. People living in sunny parts of the world start out with a greater advantage than those settled in less sun-drenched locations, since their PV systems are generally able to generate more electricity. The cost of utilities in an area should be factored in on top of that. Electricity rates vary greatly from place to place, so someone living farther north may still want to consider going solar if their rates are particularly high.

Next, there's the installation cost; as you probably noticed from our discussion of a household PV system, quite a bit of hardware is needed. As of 2009, a residential solar panel setup averaged somewhere between $8 and $10 per watt to install [source: National Renewable Energy Laboratory]. The larger the system, the less it typically costs per watt. It's also important to remember that many solar power systems don't completely cover the electricity load 100 percent of the time. Chances are, you'll still have a power bill, although it'll certainly be lower than if there were no solar panels in place.

Despite the sticker price, there are several potential ways to defray the cost of a PV system for both residents and corporations willing to upgrade and go solar. These can come in the form of federal and state tax incentives, utility company rebates and other financing opportunities. Plus, depending on how large the solar panel setup is -- and how well it performs -- it could help pay itself off faster by creating the occasional surplus of power. Finally, it's also important to factor in home value estimates. Installing a PV system is expected to add thousands of dollars to the value of a home.

Right now, solar power still has some difficulty competing with the utilities, but costs are coming down as research improves the technology. Advocates are confident that PV will one day be cost-effective in urban areas as well as remote ones. Part of the problem is that manufacturing needs to be done on a large scale to reduce costs as much as possible. That kind of demand for PV, however, won't exist until prices fall to competitive levels. It's a catch-22. Even so, as demand and module efficiencies rise constantly, prices fall, and the world becomes increasingly aware of the environmental concerns associated with conventional power sources, it's likely photovoltaics will have a promising future.

For more information about solar cells and related topics, check out the links below.