Can you store solar energy in rust and water? 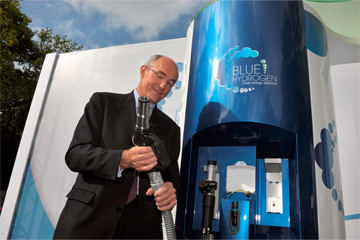 Air Liquide CEO Benoit Potier demonstrates his enthusiasm for the hydrogen economy as he tries out a hydrogen filling station near Paris in 2011. Could solar energy help out with hydrogen production?
Eric Piermont/AFP/Getty Images

What if you could run a car on only yard clippings and expired diet soda?

What if you could capture the energy of the sun in rust and then convert it to hydrogen?

As oil becomes more expensive and the environmental aspects of mining processes like fracking are challenged, the race to find inexpensive and clean energy is on. Sometimes the energy brainstorming gets a little crazy (like that first idea, which you should feel free to try out). The latter idea, however, isn't the dazed thought of a mad scientist. It's actually the very rational process of some extremely intelligent and decidedly sane scientists. Better yet, they did it cheaply.

The idea of creating hydrogen from solar energy has actually been around for a while. Scientists from Ecole polytechnique fédérale de Lausanne (EPFL) in Switzerland originally found a way to produce hydrogen from just water in the 1990s. While it sounds like busting up water molecules and turning them into hydrogen and oxygen would be a mess of scientific jargon, it's actually pretty easy to understand. Essentially, it's just using a semiconductor that creates the reaction to generate oxygen and a solar cell that then frees the hydrogen. And, of course, we can't forget the all-important electrons. Or the light. (Don't worry, we'll go into that more on the next page.)

As we've said, the Swiss contingent had already successfully managed this process two decades ago. But in 2012, they gave themselves the challenge of doing it without extremely expensive equipment. How expensive? One U.S. team managed to make a similar product that produced a 12.4 percent efficiency -- a big number, as it means that they were able to convert 12.4 percent of the solar light into hydrogen. Unfortunately, the product translated to a gasp-inducing $10,000-per-10-square-centimeters surface cost [source: Pousaz]. Not exactly competitive consumer pricing.

So why in the world do the scientists optimistically predict they can create a 10 percent efficiency prototype at a cost of $80 per square meter [source: Pousaz]?

So now that we've determined that -- yes -- we can store solar energy in rust and water, we should probably back up a little bit and explain more about how scientists in Switzerland actually made that happen.

As we said, the device contains an oxide semiconductor and a dye-sensitized solar cell. The oxygen evolution (the process of getting molecular oxygen from a chemical reaction) happens on the rust photo anode (where the current flows in) and the hydrogen evolution happens on the cathode side of the device (where the current flows out). When those reactions occur, the electrons are trapped in the dye-sensitized cell where they create a charge, and the hydrogen can be extracted from water. And voila -- energy is stored.

But as we said, the price, not the process, has long posed the biggest challenge. Instead of using a fancy semiconductor (which initiates the oxygen evolution), the team settled on cheap, easy-to-find rust. Unfortunately, rust also happens to be a pretty terrible semiconductor. Researchers at Israel Institute of Technology (Technion) are also attempting to solve this problem, by creating an ultrathin layer of rust in a solar cell that combines more efficient semiconductor silicon [source: Focus]. Likewise, the rust EPFL researchers use is actually designer iron oxide, with silicon oxide added to it, then painted with a layer of aluminum and cobalt oxide that improve the reaction performance.

This means that scientists have found a way to produce electricity and hydrogen that can be stored for use whenever -- not just when the sun is shining.

Pretty cool, huh? Ponder that while you're mowing the lawn and chugging diet soda.

Hydrogen Production in Your Palm

Photoelectrochemical curiosity piqued? You can check out this short video from the EPFL folks.

Author's Note: Can you store solar energy in rust and water?

It's pretty exciting to think that the science of using solar energy -- which has always been branded the Energy of the Clean Future -- is actually making really big strides. And while getting a big picture of the efficiency of it is one thing, it's another for scientists to dedicate themselves to making a cheap version that consumers can actually use. Perhaps the idea will catch on, and I can finally get that car that runs on expired diet soda.