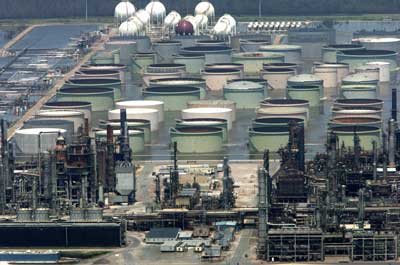 When work at Gulf Coast refineries like this one in Mississippi ground to a halt after Hurricane Katrina, the U.S. government called on the Strategic Petroleum Reserve to bolster supplies.
Paul J. Richards/AFP/Getty Images

In the months preceding Operation Desert Storm in 19­91 and less than a year after Saddam Hussein ordered the invasion of Kuwait, the world oil market was in jeopardy. With the Middle East responsible for nearly half the United States' imported crude ­oil at the time, a disruption in supplies was imminent. The country found itself in a similar situation in 2005 after Hurricane Katrina swept through the Gulf of Mexico and temporarily wiped out 25 percent of the nation's domestic production [source: DOE].

In both instances, thou­gh, the United States averted disaster by calling on its 727 million barrel secret weapon -- the Strategic Petroleum Reserve. Officially created in 1975 in response to the 1973-74 oil embargoes, the Strategic Petroleum Reserve is a federally controlled oil stockpile designed to reduce the country's vulnerability to interruptions in its oil supply.

The reserve works by maintaining a relatively stable level of crude oil, usually around 700 million barrels, and releasing that oil when conditions call for it. While Desert Storm and Hurricane Katrina are the only two events that have led to emergency drawdowns, the Energy Policy and Conservation Act (EPCA) outlines several instances when oil can be released:

To avoid overpaying for oil and adversely affecting the oil market, the reserve adopted official guidelines for acquisition procedures in 2006. These procedures direct the U.S. Department of Energy (DOE) to comprehensively survey the current oil environment to ensure it buys and sells oil at fair prices. Sometimes ­oil is bought outright from other countries. At other times the reserve acquires oil through royalty-in-kind transfers, which are transactions between the federal government and oil companies that lease land on the U.S. outer continental shelf. You may also hear people talk about oil deferrals, which are simply agreements by the DOE to delay scheduled shipments of oil due to tight markets or disruptions in the marketplace. Many times, deferrals enable the reserve to acquire oil at a cheaper price later on.

­While the reserve can currently hold 727 million barrels of crude oil, in 2005, President George W. Bush directed that amount to be increased to 1 billion barrels; in early 2007 he decided to increase that even further to 1.5 billion barrels. So where does someone squirrel away that kind of crude? Keep reading to find out.

Test your knowledge of oil with our Oil Shale Quiz.