The Oil Reserve: A Salty Strategy 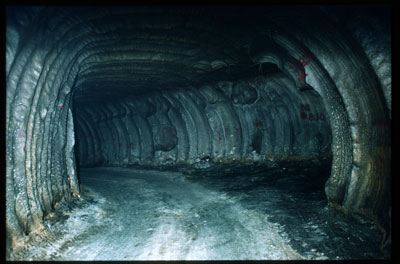 When you think about the Gulf of Mexico, you may or may not think of its beautiful sandy beaches and crystal clear waters. It's pretty much a given, though, that you don't associate it as the storage point for millions of barrels of crude oil. But since 1977, the U.S. Department of Energy (DOE) has acquired 62 massive salt caverns along the coasts of Louisiana and Texas for storing crude oil. Because of the 2005 expansion directive, the DOE is in the process of creating a reserve in Mississippi as well.

The salt caverns are created by drilling wells into massive salt domes and injecting them with freshwater to dissolve the salts. The dissolved salt is then pumped back o­ut and either piped several miles offshore or reinjected into disposal wells. This process, called solution mining, creates caverns of very precise dimensions that can hold anywhere from 6 to 35 million barrels of oil. The average cavern can hold 10 million barrels of oil, and at 200 feet (61 meters) wide by 2,000 feet (610 meters) high, it's big enough to comfortably fit Chicago's Sears Tower inside [source: DOE].

While underground caverns may not seem like the best place to store an emergency oil supply, they're actually very secure. For one thing, since they're 2,000 to 4,000 feet (610 to 1,219 meters) underground, the extreme pressure prevents cracks from forming and leading to leaks [source: DOE]. Also, the natural temperature difference between the top and bottom of each cavern encourages the oil to circulate, which maintains its quality.

To retrieve oil from a cavern, all you have to do is pump water into its bottom. Since oil floats on water, the oil will simply rise to the surface. And because the Gulf of Mexico is close to much of the nation's oil transport network, the oil can be transferred quickly to interstate pipelines or loaded into ships or barges. At its present 727 million barrel capacity, a full reserve could fuel the United State's energy needs of 20.7 million barrels a day for about 35 days. Once the resource reaches the 1 billion barrel mark, that will extend to 48 days [source: EIA].

­Although the United States' emergency supply of oil crude is the largest in the world, several other countries have their own version. The International Energy Agency is a coalition of 27 member countries formed to alleviate oil supply emergencies. Each member country agrees to maintain oil stocks equal to at least 90 days of its net oil imports to be released when necessary. To learn more about strategic petroleum reserves -- both in the U.S. and elsewhere -- visit the links below.

To accommodate the additional 273 million barrels of oil ordered by President George W. Bush in 2005, two of the current storage sites in Louisiana and Texas will be expanded, and a new site will be constructed near Richton, Miss. Since the creation of the salt caverns is an environmentally disruptive process, the DOE had to submit several environmental impact statements to the Environmental Protection Agency before it was given the go-ahead. For each barrel of crude oil stored in a cavern, it takes seven barrels of water to create that space. The final expansion is expected to be completed by 2020 [source: DOE].