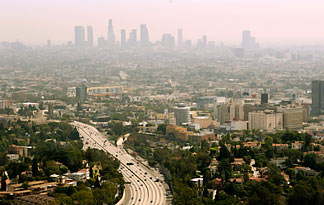 How much do you know about air pollution?
David Butow/Corbis

Smog isn't just unsightly, it's deadly. In the U.S., smog is largely considered a problem that's unique to Los Angeles, thanks to both a high concentration of traffic and a geographic landscape that traps buildup in the picturesque peaks and valleys. (Vehicles and other sources of fuel-driven transportation are responsible for 90 percent of the risk of developing cancer in the Los Angeles area.) But ozone, the major component of smog, has the potential to be problematic everywhere.

Burning fossil fuels to power our vehicles gives off CO2 emissions, which is the leading cause of global warming. The United States is the world's highest producer of these harmful gases. Burning fuel can also produce toxic substances such as sulfur dioxide and carbon monoxide (which can be fatal). Ozone appears when hydrocarbons and nitrogen oxide -- two common ingredients of air pollution -- come together. Sunlight causes a chemical reaction that makes the combination especially potent and dangerous, resulting in general respiratory problems such as wheezing and shortness of breath, as well as nausea and headaches. What's even more worrisome is that repeated exposure can cause irreversible lung damage and increase the risk of lung cancer.

Sitting in traffic has a bigger impact on your health than you may think. As tempers flare and stress levels simmer, all the pollution being generated by neighboring vehicles can actually seep into your car's cabin, creating a concentrated solution of toxic air. As the air recycles through the car, the toxins can reach levels of up to 10 times those found in normal city air. These pollutants, which are sometimes referred to as particulate matter, are absorbed by the lungs, and can cause problems with the respiratory system, the heart, asthma, lung cancer and various other infections. Exposure to particulate matter pollution can also result in decreased life expectancy. Diesel vehicles are the worst offenders, responsible for 79 percent of vehicle-oriented particulate matter pollution.

But while we tend to think of cars as being the worst culprits, seaports are another huge source of air pollution. People who live and work near the seaports of Los Angeles and Long Beach, for example, are among the highest cancer risk populations in Southern California -- ships burn immense quantities of fuel even when they aren't moving. Airports are also noteworthy in this regard. Both of these industries have methods of reducing pollution -- ships can save fuel by using shore-side power instead of idling at the dock, and airplanes can cut consumption if they move more efficiently around the airport grounds when they're not in the air. But such practices are relatively uncommon.

The facts are scary, but we've already made some progress and there are still more steps we can take. So, what can be done? The Environmental Protection Agency (EPA), which develops regulations and programs to reduce airborne toxins from transportation, says the key to reducing harmful emissions is a threefold approach: using lower carbon fuels, improving vehicle technology and simply traveling fewer miles.

Other simple changes, like driving carefully and keeping your car in good shape, also help save fuel. To reduce fossil fuel emissions and reduce dependency on imported crude oil, the EPA strongly supports the use of renewable fuels (such as electricity) and alternative fuels (such as natural gas). Some types of fuel are even considered to be both alternative and renewable. Auto manufacturers are developing, producing and selling lots of new alternative fuel vehicles, but some older gasoline and diesel vehicles can be converted to run on clean alternative fuels, too.