Why Can't We Generate All Our Energy From Wind Power?

Browse the article Why Can't We Generate All Our Energy From Wind Power? 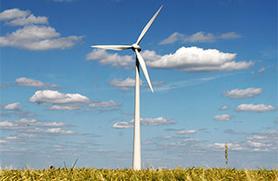 Why can't we generate all the electricity we need from the wind? That's a question that I often hear coming from people who are starting to learn about the environmental challenges that are facing us, and it's a good question. At first glance, it might seem straightforward: We're already producing clean electricity using wind turbines, so we know it works. Why not just build lots and lots of them until we produce enough power, thus solving the problems caused by dirty power plants?

Sadly, as is often the case, reality is a bit more complex than that. To answer this question, we need to better understand how wind power works, and how a power grid works. Let's dive right in, shall we?

How Does Wind Power Work?

So far so good, but here comes the real challenge: Wind is intermittent. Sometimes it blows, sometimes it doesn't, and it's hard to predict more than a few hours in advance what it will do. Because of this, wind farms (groups of wind turbines) usually have two power ratings: A capacity number, and a capacity factor number.

So for example, if our wind farm above is operating at 30% capacity, it would be producing an average of 100 megawatts at any time. But this doesn't mean that you can count on 100 megawatts coming out; on some day it might be 300, and on others it might be 30. This is a problem not only because you need to build many more wind turbines than the capacity numbers might lead you to believe (and the media usually reports capacity numbers, not capacity factors), but also because of something else that we will see in the next section below.

How Does the Power Grid Work?

"Electricity generation and consumption must be balanced across the entire grid, because energy is consumed almost immediately after it is produced. A large failure in one part of the grid - unless quickly compensated for - can cause current to re-route itself to flow from the remaining generators to consumers over transmission lines of insufficient capacity, causing further failures. One downside to a widely connected grid is thus the possibility of cascading failure and widespread power outage." (source)

This means that if the wind stops blowing and a wind farm stops producing electricity, some other source of electricity has to pick up the slack.

This problem can be mitigated if you have lots of wind farms spread over a large geographical area, so that when the wind doesn't blow somewhere, chances are that it blows somewhere else. This helps, but doesn't completely solve the problem. Remember that the grid has to balance supply and demand at all times, so if bad luck has it that there's no or little wind over most of your wind farms on the same day, you still have a problem. So what should we do?

What's the Future of Wind Power?

But what can we do to help increase the quantity of clean, renewable energy being produce by the wind everywhere?

The first thing to do is to improve transmission. Many areas have a surplus of wind power but they can sell it to other areas that would gladly buy it because those places aren't interconnected. There are also areas where new wind farms could be built, but they aren't because there are no transmission lines. A better distribution system would make it easier to compensate for a deficit on one side by tapping into the surplus on another side.

Another way to allow the power grid to handle more wind power would be to shape demand (meaning, to influence how much electricity people and industries use). A lot of it can be done using smart grid technologies, such as smart meters that can vary the price of electricity in real time (when the price is higher, demand goes down, when price is lower, demand goes up) and with deal with power-hungry industry so that they time some of their operations to make the best use of the power that is available.

Thirdly, increasing the storage capacity of the grid would make a big difference. Right now, most power needs to be use immediately when it is produced, with only a little of it being stored for later use (this can be done with the water reservoirs of hydropower stations, for example). If we were able to store more power, we could tap into that reserve when the wind doesn't blow. The big challenge here is to have storage that is inexpensive enough to make sense. This might require breakthroughs in battery or hypercapacitor technology.

Finally, the most realistic option seems to be diversification. Wind power is the cheapest kind of renewable energy right now, but it should be combined with other kinds to better mitigate the intermittency problem. Solar photovoltaic, solar thermal, deep rock geothermal, wave power, hydro power (when done right), biomass, etc. We need all of those, along with a major push for efficiency and conservation (it's usually cheaper to save a watt than to produce a new one).