by Sarah Dowdey
Prev NEXT
10

What is China doing to create a "green Olympics"? 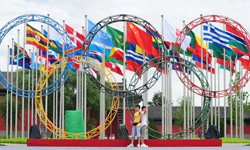 When the cameras at the 2008 Beijing Olympics weren't tracking Mich­ael Phelps on his amazing climb to eight gold medals, or following the drama of the Chinese and U.S. gymnastics teams, they'd swoop in for a shot of the nest-shaped National Stadium backed by hazy skies.

China won its Olympic bid by promising to hold the world's first "green" games and clean up a city known for air quality worse than that of Los Angeles. To meet the goal, the city implemented real changes, such as adding scrubbing systems to power plants and updating subway lines. But Beijing also employed some short-term fixes in order to avoid the embarrassing spectacle of athletes competing in gas masks; they banished sooty industries outside city limits and applied an even-odd license plate law to stem car pollution.

­Did Beijing's efforts work? Yes and no. The city improved its infrastructure dramatically and constructed some of the most energy-efficient and architecturally stunning green buildings to date. But Beijing was unable to tamp down particulate matter and ozone levels that were reported at five times the upper threshold considered safe by the World Health Organization. To learn more about the 2008 games, read What is China doing to create a "green" Olympics?