by Sarah Dowdey
Prev NEXT
6 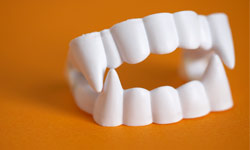 Cutting vampire power will take a bite out of your electricity bill.
Rob Melnychuk/Digital Vision/Getty Images

­­A­s far as environmental guilt goes, vampire power usually ranks pretty low on most people's list. Few folks contract severe cases of eco-anxiety when they forget to unplug their cell-phone charger. Still, what seems like small and even insignificant power drain adds up to a lot of wasted energy when it's happening across a country -- or even just a home. The United States alone spends more than $3 billion a year on such wasted energy, according to the U.S. Energy Information Administration.

­Vampire power, also known as standby power or phantom load, refers to the energy electronics and appliances suck from their sockets during standby mode. While they might look like they're switched to "off," most gadgets continue to power certain systems or display screens, while things like cell-phone adapters supply a constant charge, even if they're not charging. So what's an easy fix, short of unplugging all your appliances every time they're not in use? Consolidate several of your electronics and gadgets with a surge protector or power strip. Simply flip the switch off when they're not in use. Find out more about vampire power and how to stop it in How Vampire Power Works.