by Sarah Dowdey
Prev NEXT
4 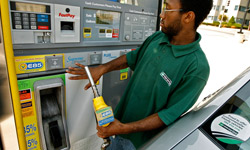 An Enterprise employee gases up a Chevrolet with E85 flex-fuel in Washington, D.C.
Chip Somodevilla/Getty Images

­B­etween the high price of oil and the rising price of food, it would be easy to think ethanol was an economic boon or just a good recipe for famine. Ethanol, the low-percentage fuel additive typically made from corn or sugarcane, burns cleanly and emits fewer greenhouse gases than its oil-based counterpart. It's also grown from crops that are produced domestically, providing work for the agricultural industry and reducing reliance on foreign oil.

­So what's the problem with making crops into fuel? Well, to start with, ethanol doesn't contain as much energy as gasoline. That means that the energy that goes into growing, producing and transporting the fuel potentially outweighs the energy content of the end result. Also, growing corn is no easy task -- it takes up a large amount of land that could lie fallow or be used for growing actual food. But while ethanol is on the outs with many environmentalists, its cousin cellulosic ethanol is faring much better: The fuel made from nonfood products like corn stalks, switchgrass and wood chips could wind up costing less and having fewer of the environmental side effects of crop-based fuel. Read all about the fuel in Is ethanol really more eco-friendly than gas?