by Sarah Dowdey
Prev NEXT
2 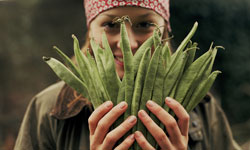 Locavores limit their food supply to what is grown and produced within a restricted radius.
Paul Viant/Getty Images

­Lately it's become trendy to think about food in a decidedly old-fashioned way. While plenty of gourmands still explore the bounty of exotic fruits, vegetables and spices available from around the world, others are sticking closer to home. Locavores are pe­ople committed to eating only foods that have been grown and produced locally. They're at the forefront of the local food and Slow Food movements, and they restrict their diets for environmental, economical and gustatory reasons. Some like the challenge of cooking with seasonal foods; others say food that goes from field to plate in one day just tastes better.

­The definition of locavore, however, isn't as strict as it sounds. Locavores set their own radius for what they consider "local." That can limit them to 100 miles (80 kilometers) from home or be as broad as an entire state. Some locavores also make exceptions for mainstays that aren't local to most places: sugar, salt, coffee and olive oil. The movement might sound expensive, but it's actually in keeping with slow economic times -- locavores sometimes supplement their food with produce from their own gardens. After all, it doesn't get any more local than your own backyard. Learn more about eating and buying local foods in How Locavores Work.