by Eric Baxter
Prev NEXT
7

Reduce Distance Driven and Time on the Road 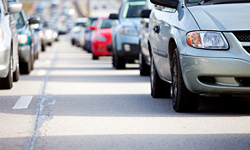 Transportation engineers and urban planners are looking at how to reduce traffic congestion so vehicles spend less time on the road.
Sean Locke/Getty Images

According to the Environmental Protection Agency (EPA), vehicles account for almost one-third of smog-forming emissions, and every year, more people take to the road and drive farther distances, an increase of more than 120 percent since 1970. Driving fewer miles would, therefore, decrease the amount of pollution produced by cars.

How to do this is easy. Various sites make the same general suggestions:

However, this is just the tip of the transportation iceberg. Transportation engineers and urban planners are looking at how to reduce traffic congestion so vehicles spend less time on the road. Think of the infamous Los Angeles traffic where the average commute time can exceed more than an hour. As people sit in traffic, inching forward, their cars are releasing a steady stream of pollution that, when combined with the geography of the LA basin, creates some of the worst smog in the country. Better roads, better traffic light timing and access to better public transportation would go a long way to reducing the pollution.