by Lance Looper
Prev NEXT
9

One of the Oldest Forms of Energy 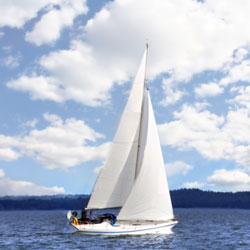 Hey, look at that...the wind is making my boat move! Ancient sailors first harnessed the power of the wind.
Hemera/Thinkstock

Wind power dates back to at least 5000 B.C., with the earliest known use for powering sails [source: U.S. Department of Energy]. This is perhaps a no-brainer, but early sailors were not just the first to figure out an easier way to get from Point A to Point B. They laid the groundwork for humankind's understanding of important concepts such as thermodynamics and lift [source: TelosNet]. These principles would be key for other innovations, beginning with the very first windmills, which were powered by sails. These devices were used as mills and water pumps, and paved the way for an agricultural revolution by automating otherwise time-consuming activities.

This technology was carried to the New World, where it played an important role in settling the wilderness and plains of early America. As new technologies emerged, the windmill lost ground to steam engines and inexpensive electric power when, in the 1930s, the Rural Electrification Program brought inexpensive electricity to the rural U.S. [source: National Archives].

But wind is coming full circle, making a comeback as the price and accessibility of fossil fuels make it an increasingly prohibitive method for energy production.