Clean Coal Is the Answer 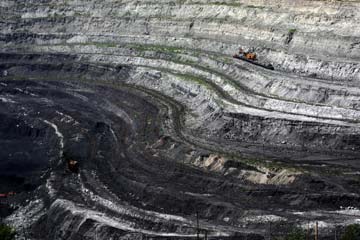 Critics argue that the coal mining process alone prevents it from ever being "clean," to say nothing of its lingering pollutants.
China Photos/Getty Images News/Getty Images

As it turns out, coal is exceedingly dirty. Just consider the facts: Coal-fired power plants spit out 59 percent of the United States' total sulfur dioxide pollution, 50 percent of its particle pollution and 40 percent of its total carbon dioxide (CO2) emissions [source: Sierra Club]. Factor in smog, ozone and health concerns and you have quite an environmental villain on your hands -- and that's not counting all the toil, danger and upheaval involved in mining it.

Yet coal, for all its ills, continues to play a vital role in global energy production, and you simply can't reasonably ask everyone to stop burning it -- not when renewable alternatives aren't ready to pick up all the slack. That's where clean coal enters the picture, theoretically to mitigate the impact of coal pollution until such time as it can be abandoned altogether. For more information on the various refining processes involved, read "What is clean coal technology?"

Problem solved, right? Wrong. A great deal of clean coal technology centers around capturing and storing pollutants that would otherwise be released in the burning process. With CO2, this involves either pumping the gas down wells to depleted oil fields or into deep-sea depths. Not only can the later option potentially endanger marine ecosystems, but also they both require care and monitoring to prevent polluting the environment anyway. Critics charge that all this amounts to a redirecting of pollution, not a true reduction of it.

Plus, environmentalists also point out that coal mining still entails a great deal of geologic upheaval, riddling the Earth with tunnels and sometimes requiring mountaintop-removal mining. They've also leveled greenwashing accusations at the very oxymoronic name "clean coal." For their campaign, the American Coalition for Clean Coal Electricity used the same marketing company that came up with the ever-popular slogan "What happens in Vegas, stays in Vegas."

Therefore, the myths surrounding clean coal tend to paint it as more of a solution than it is, as well as a cleaner energy source than it could ever possibly be.