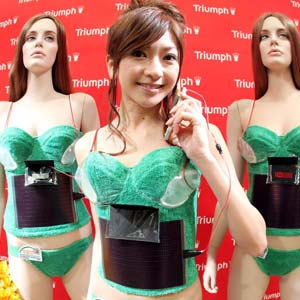 When was the last time you saw a sun-powered race car? How about a jet fighter decked out with solar panels? Chances are, the fastest and most powerful examples of technology in the world around you are powered by something other than the brilliant rays of the sun. None of this exactly helps solar power's reputation as a wimpy, low-voltage way for tree huggers to power their decorative, iridescent yard squirrels.

First, even if solar electricity -- also known as photovoltaics (PV) -- was only capable of energizing our low-power vanity gadgets and amazing, fuzzy green undergarments, many commentators identify the statement "little steps can't make a difference" as a major myth surrounding the green movement. Just consider Triumph's Photovoltaic-Powered Bra (seen in the nearby photo). While such gadgetry hardly makes a dent in global energy consumption, it's a small change that forces others to think about the ecological matters at hand and possibly make both small and substantial changes in their own lives.

Second, PV power may not be in a position to solve all our energy problems right now, but its potential for the future is great. Remember, we're talking about leaching energy from a titanic, star -- one that steers an entire system of planets, our atmosphere and life as we know it.

The United States Department of Energy (DOE) estimates that the solar energy resource in a 100-square-mile (259-square-kilometer) area of Nevada could supply the United States with all its electricity. We're talking 800 gigawatts of power, and that's using modestly efficient commercial PV modules. Break all that down and each state would only need to devote 17 x 17 miles (27 x 27 kilometers) of solar cells (not all states are quite as sunny as Nevada). Where would all that land come from in each state? The DOE points to the country's estimated 5 million acres (2.02 million hectares) of abandoned industrial sites as a potential candidate that could contribute a whopping 90 percent of U.S. electrical consumption.

In the meantime, PV technology continues to develop and the U.S. industry alone is expected to reach the $10-$15 billion level by 2025. At this rate, solar electricity in the United States will offset 11.02 million tons (10 million metric tons) of carbon dioxide per year by 2027.

Just try to imagine how big that solar-powered squirrel could be.